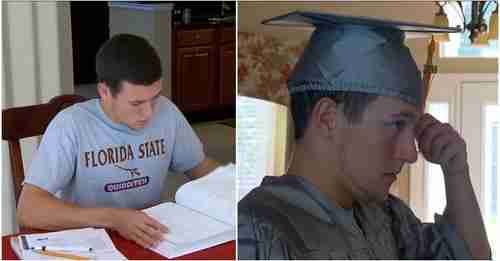 A Teen homeless for 12 years graduated as a valedictorian “because I have everything to lose.”

Not everyone enjoys high school. The stress of work and the pressure to fit in can make it an experience many students are eager to leave behind.

Students will graduate once they have managed to secure this challenging journey.


One group of teenagers, however, was unaware of the struggles one of their classmates had gone through until he gave a memorable speech as part of his honor for being named valedictorian at their graduation ceremony.

The valedictorian student has maintained a GPA of 3.9 to 4.0, equating to at least 95% on all assignments.

For most students, achieving this is no small feat and calls for a level of dedication worthy of such a distinction, but Griffin Furlong did it while living on the streets.

The dedicated student has been homeless for the last 12 years, sleeping on couches and in shelters. Griffin wasn’t fortunate enough to have a stable upbringing; his mother died from cancer, and his father had financial hardships.

He, his father, and his older brother were homeless for more than ten years, and he had to finish high school without a room. He lacked a place to rest, a place to shower, and a place to do his homework.

Griffin Furlong presented his final speech as a high school student in front of his graduating class, much like other valedictorians around the country. Both parents and teachers were shocked by what he said.

The Furlong family did reside in a rental home for a while, but they were ultimately kicked out. Griffin described going to bed without food and not knowing where his next meal would come from during his speech.

He never had a meaningful childhood. He recalls being made to feel less than a human, and at that point, he resolved to succeed.

Griffin pushed himself in his studies and eventually graduated as valedictorian because he believed a good education would benefit him in the long run. Let’s look at his motivational story.

Griffin was aware that the path to a better life rested in education. He had grown bored of going to bed at night and hoping not to wake up. Griffin turned all of his attention to his studies after coming to this understanding, and as a result, he graduated with a remarkable 4.65 GPA, according to People.


As all valedictorians do, Griffin was required to deliver a speech to his class. He decided to be open and vulnerable with his classmates and professors about his journey to motivate others.

Griffin reads from his valedictorian speech in an emotional clip shared by ABC News, saying,

“Because I have nothing to lose, I behave the way I do in class.”

Before ending his lecture, Griffin encouraged his peers to make meaningful contributions to society. The young man said in conversation Today:

“Never give up… I’ve heard it all my life, so never let somebody tell you that you can’t do something. People used to tell me I wasn’t intelligent enough; however, I am in first place in my class..”

He is an example of what is achievable when you are driven, ambitious, and have a goal. However, Griffin’s statement that he was homeless caught his classmates by surprise and his teachers off guard when they heard him speak.

Griffin’s calculus teacher, Jennifer Stover, told NBC News that although the faculty was aware of Griffin’s troubles at home, they were unaware of their extent. He never mentioned his problems in class and always had a smile on his face.

Griffin hoped that by sharing his experience, other children facing hardships would be motivated. Additionally, his classmates wanted him to know they had already looked up to him.

Therefore, Griffin’s friends began a GoFundMe campaign when he couldn’t pay his tuition at Florida State University. Together, they raised close to $40,000 to assist him in covering the expense of his tuition, and the institution also committed to contributing.

Even better, he was given a room by his lover’s family while he was pursuing his degree. His friend’s mom, Jennifer McCall, said, “He’s not defined by what happened to him.”

Griffin said he could breathe a little easier after telling his school what was happening. He told Today:

It has lightened my load a tiny bit. Hey, I’m homeless. I don’t just approach folks and say that. It’s a challenging task. My closest pals are the only ones with access to all the information.

Griffin and his brother Sean grew closer due to the situation, despite the challenges and their success in overcoming them. When Griffin graduated as valedictorian, Sean, about to gain his degree from Florida State University, spoke to Today about how it improved their bond.


“I could not explain what I was going through to my pals during that time. It was mostly just Griffin and me; we did everything together, especially playing baseball because I couldn’t bring them to my house. He’s just an incredibly resilient person. Even though he is younger than me, I respect him.”

Griffin is a remarkable young man, and many people find inspiration in his life story.


What do you think of the achievements of this young man? I believe it shows how significant the effort is. Tell your friends and family this story about this amazing young man! 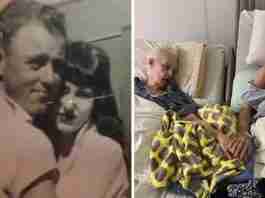 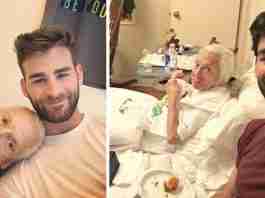