In the most touching turn of events, a great-great-granddaughter surprised an older woman with a gift, leaving her breathless with feelings beyond words. She had no idea when the day would come, but she would treasure it until the end.

Juanita Courtney had no idea what the 2021 holiday season would bring for her. She resided in a nursing facility in Knoxville, Tennessee, called The Pointe at Lifespring.

Among many other things, Courtney had a sincere wish that she wished with all of her heart and soul would come true. 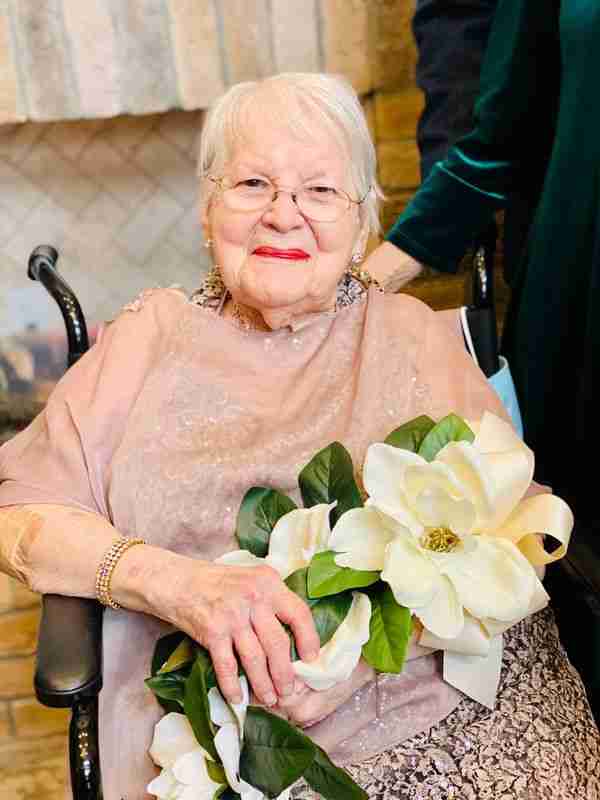 Ashley Stewart, Courtney’s great-great-granddaughter, and her fiancé Josh had decided on a Disney-themed wedding. However, when things didn’t turn out as they had hoped, the two came up with a brilliant idea.

They bought her a gorgeous new dress and even helped her with her hair and makeup.

Since their cherished “Nanny” wouldn’t have been able to attend their Florida destination wedding, the couple chose to wed in a religious ceremony at her retirement residence. Stewart brought up the concept to her grandma and other family members, who were happy and appreciative of her generosity. 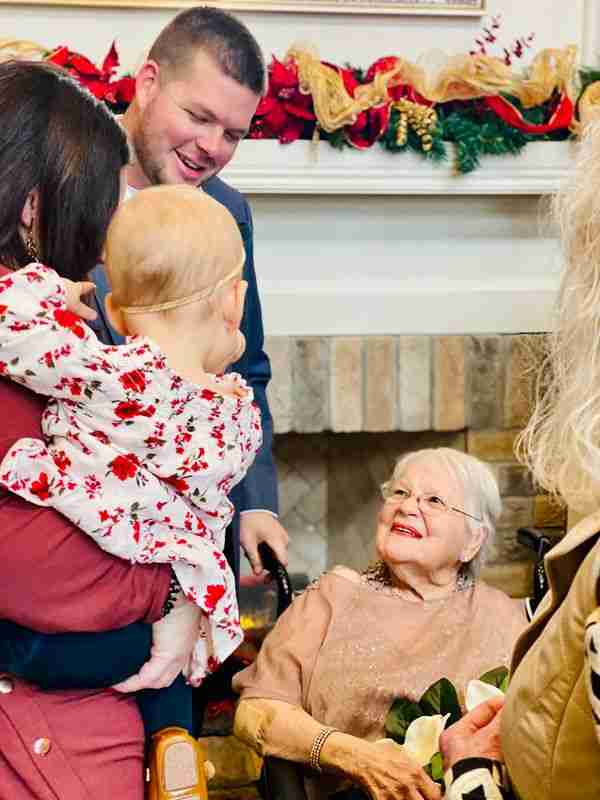 
The senior home’s “Living the Dream” campaign, where staff members select one resident each quarter to have a great desire or a bucket list item fulfilled, perfectly matched the Tennessee couple’s proposal, they noted.

Courtney’s goal was to have her family all together under one roof on Christmas Eve because they hadn’t celebrated the holiday season together in 16 years, according to Julie Sharp, director of marketing and sales at the retirement home. 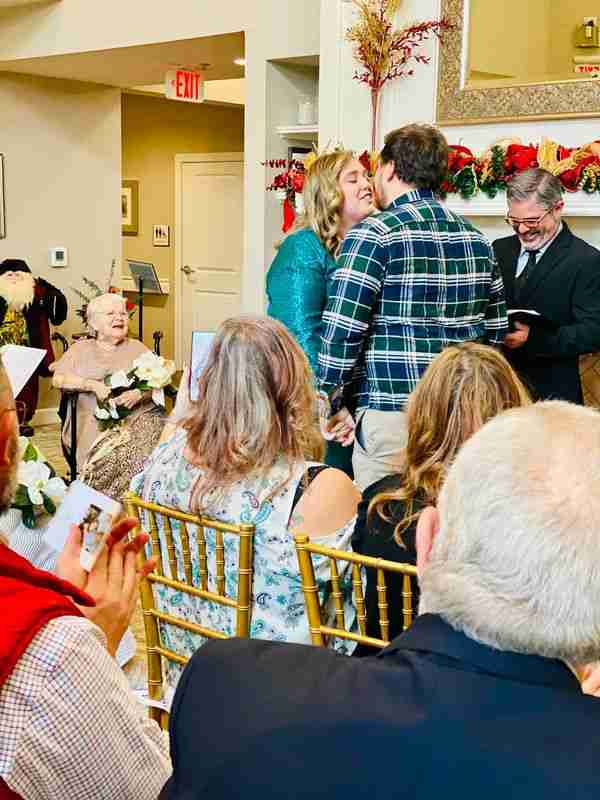 
The last time everyone came together to enjoy the holidays was at Courtney’s house on Christmas Eve in 2005, according to her family. Six days before their 59th wedding anniversary, one month later, the older woman suffered a sad tragedy when her husband, Paul, passed away.

Courtney was so heartbroken after losing her beloved life partner that she could not host Christmas Eve gatherings in her house. She then frequently visited her relatives one at a time over the holiday season. 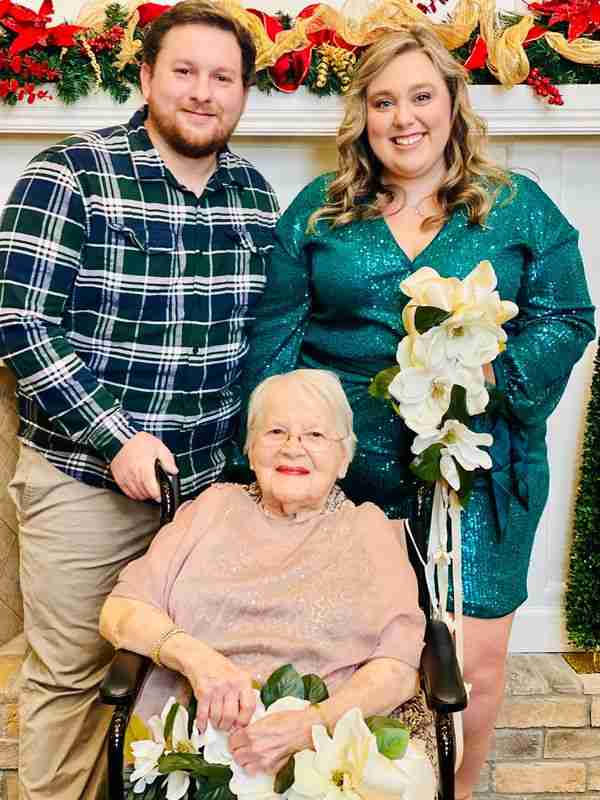 
34 family members visited the great-great-grandmother at her nursing home on Christmas Eve in 2021 to surprise her. The Pointe team went the extra mile to make Courtney feel exceptional. They even assisted her with her hairstyle and cosmetics and bought her a stunning new outfit.

The team lovingly recreated her bridal bouquet as a huge tribute to the day she wed her late husband on February 1, 1947. The staff of the senior living home also had a precious photo of Courtney and Paul framed especially for the event. 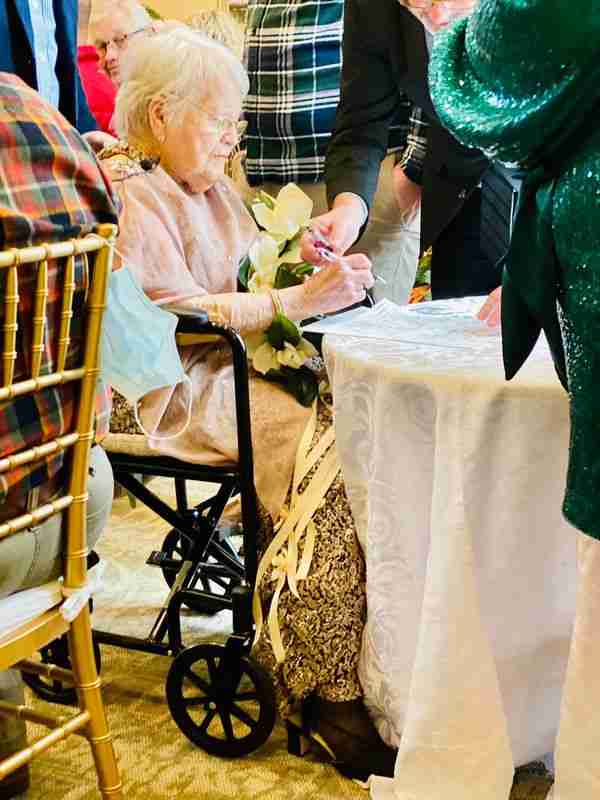 The Priceless Reaction of Nanny


The room echoed joy, love, and laughter as 97-year-old Courtney joyfully signed her name as a witness and matron of honor on her wonderful granddaughter’s license. The bride said as she recalled her beloved Nanny’s amazing response:

“She got a little choked up and said, ‘I thought I would never get to go to one of my family members’ weddings again.” 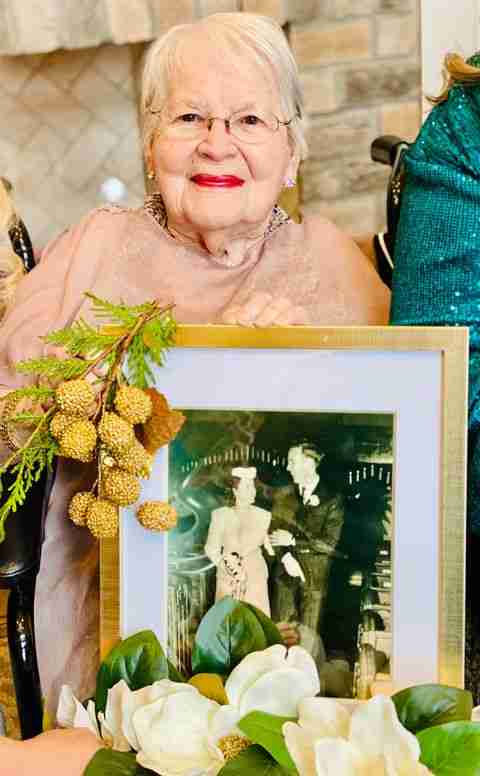 A Day to Remember


Stewart said she was honored to have her dear Nanny join her on such a momentous occasion as she began a new chapter in her life. Sharp stated that Courtney’s joy at witnessing her beautiful great-great-granddaughter marry before her eyes were something she would remember for the rest of her life.

An overjoyed Stewart stated that she was lucky to have five generations actively involved in each other’s lives, which was unique. She stated that she and Josh intended to have a bigger wedding in the future. The Pointe at Life Spring also posted a wonderful tribute to Courtney. The caption stated:

“The Pointe at Lifespring is a community where dreams are fulfilled, memories are made, and love is captured daily!” Still sharing this Christmas Eve wedding, where Nanny’s dream became a reality!”

When the touching tale of Courtney serving as the cutest matron of honor circulated on social media, it attracted the attention of many web users. These are some of the remarks that folks made.

“That is so sweet…” I wish my grandma was still here…”

“Such a special and memorable moment!”

We are happy that the older woman’s sincere wish was granted in such a lovely way, all because of her kind and a caring great-great-granddaughter. If you enjoyed reading this story, you could find another about a grandmother who attended her granddaughter’s wedding as a bridesmaid on her 100th birthday by clicking here.