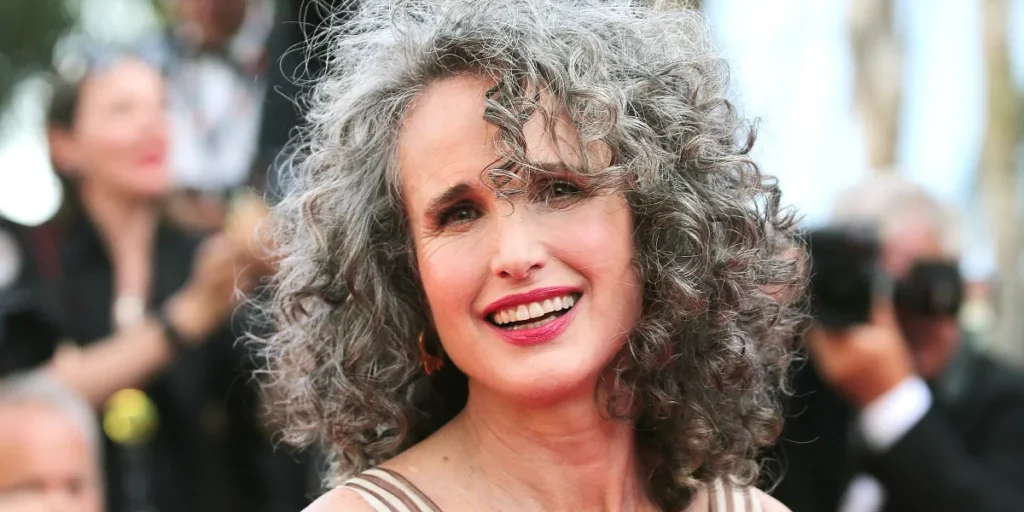 Andie MacDowell, 64, is getting ready to become a grandmother. She takes pride in her age, wrinkles, and gray hair. She experienced Criticism for feeling confident in her skin.

It can be scary to age as a well-known person in Hollywood. It makes sense that many actors turn to cosmetic surgery to keep their youthful appearances, given the constant scrutiny from countless fans.

But not all famous people agree that getting older is a bad thing. Andie MacDowell never tried to hide her aging flaws; instead, she chose to take pride in her experience. 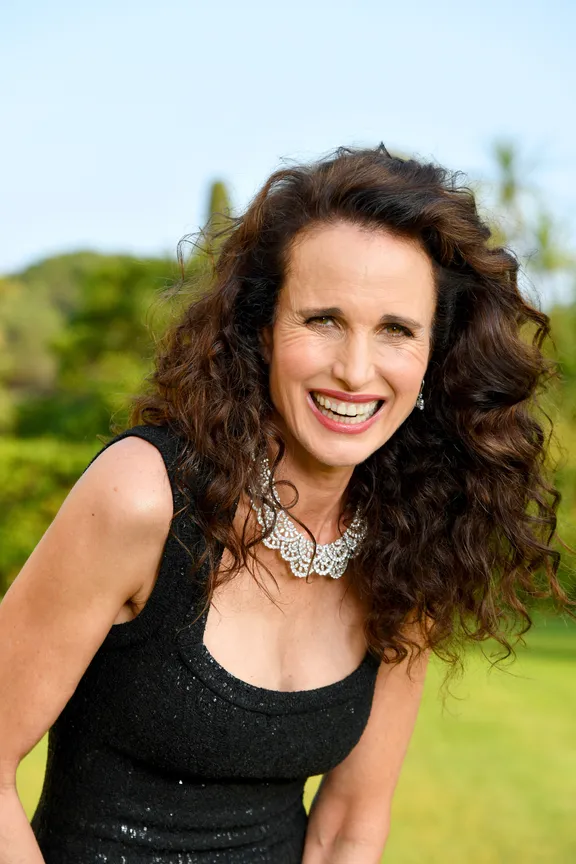 “I said, ‘I don’t feel like losing my beauty. I feel like it’s a different kind of beauty.'” 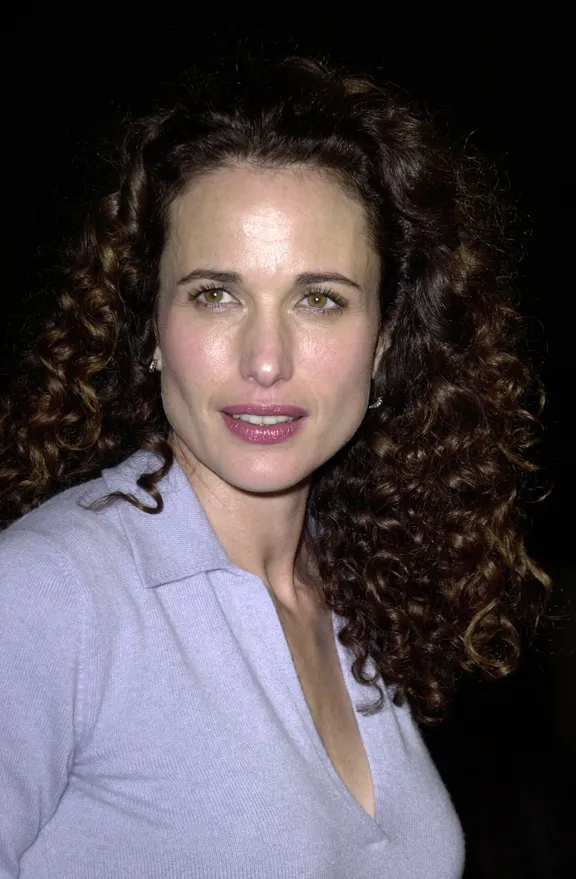 As she grew older, MacDowell advocated for accepting her natural beauty. Although she never criticized anyone for having cosmetic surgery, she stated that she would never have it done on herself. She considers natural aging to be a beautiful process.

MacDowell recently made a bold statement by refusing to color her hair as she aged. 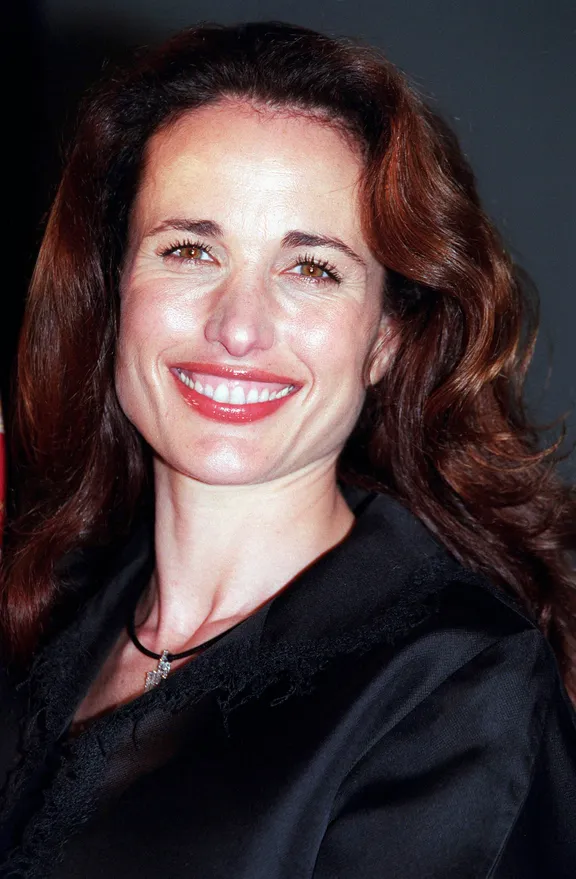 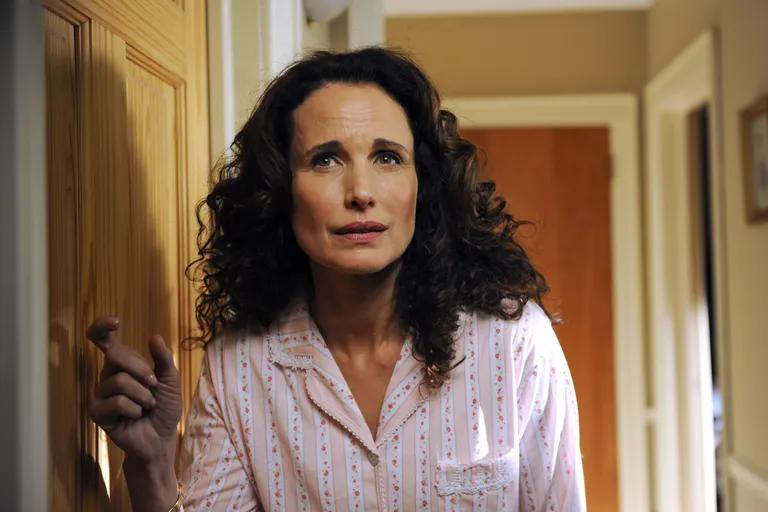 The actress admitted to having tried Botox once but despised it and vowed never to do it again. She also said she had been to a plastic surgeon once and left after a short visit knowing she would never return.

Instead of having plastic surgery, MacDowell tries to care for her skin by getting facials and taking care of herself. The actress stated that she has come to terms with herself and who she has become. 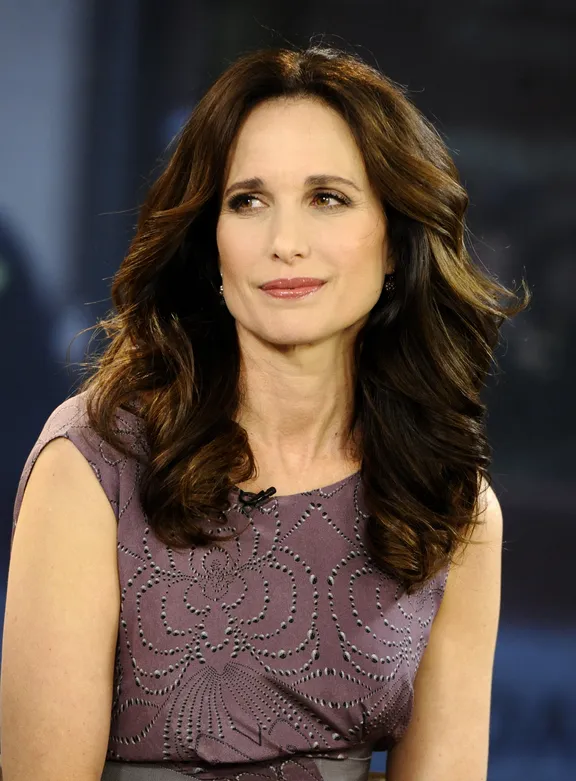 MacDowell has worked as a spokesperson for the cosmetics company L’Oréal throughout her career. She stated that working for a well-known brand has been fantastic because they have supported her and allowed her to embrace aging.

“I think one of the reasons I stayed with L’Oréal is that it was important to them to carry that message that aging is not about losing your beauty.” 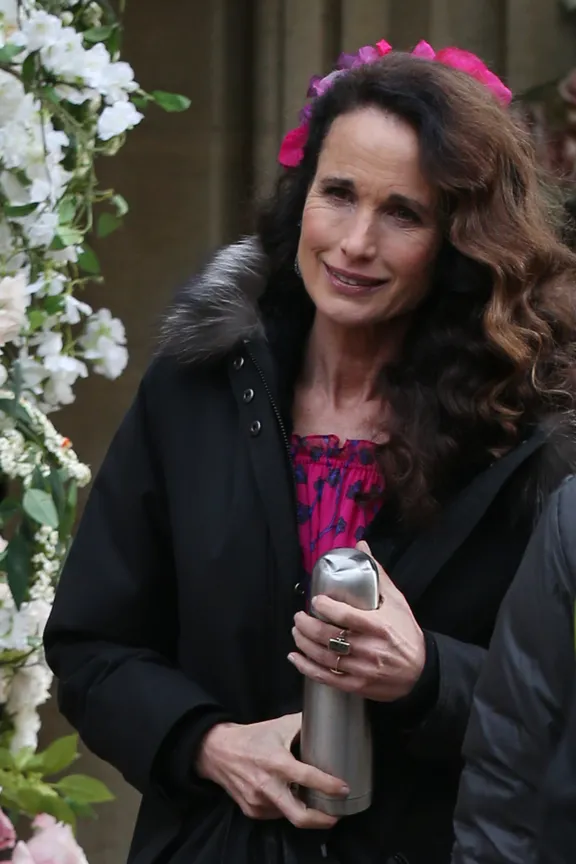 MacDowell has come to terms with the fact that she is getting older over the years, but she has realized that aging isn’t as fatal as many believe. The actress learned to be proud of her age.

MacDowell recently made a bold statement by refusing to color her hair as she grew older. She was honest about her decision and said that her daughters had much to do with it.

MacDowell decided to remain strong, and she hasn’t looked back since. 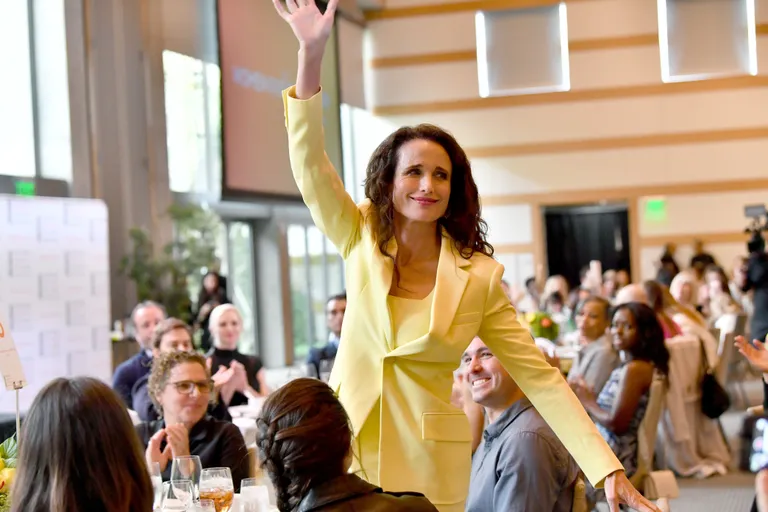 According to MacDowell, she began turning gray at the start of the lockdown. Since they shared a house, she frequently saw her kids during the quarantine, and as her hair began to bald, they never stopped encouraging her. She revealed:

“Every time my kids saw me, they kept telling me I looked badass with my gray hair.”

MacDowell chose to maintain her natural hair color because her children’s encouraging words helped her feel more confident. Her managers initially advised her to dye her hair rather than go the natural route. She objected.

The time was right, MacDowell told them, to display her graying hair. The actress claimed that if she waited any longer, she would lose the chance to achieve the distinguished appearance of hair that hadn’t completely turned gray.

The actress soon received a proposal for a new project, forcing her to decide. MacDowell decided to stand by her position, but she hadn’t turned around. She said she loves her new natural hairstyle and feels at ease.

“It was clear to me that my instincts were right because I’ve never felt more powerful.” I feel more honest. “I feel like I’m not pretending.” 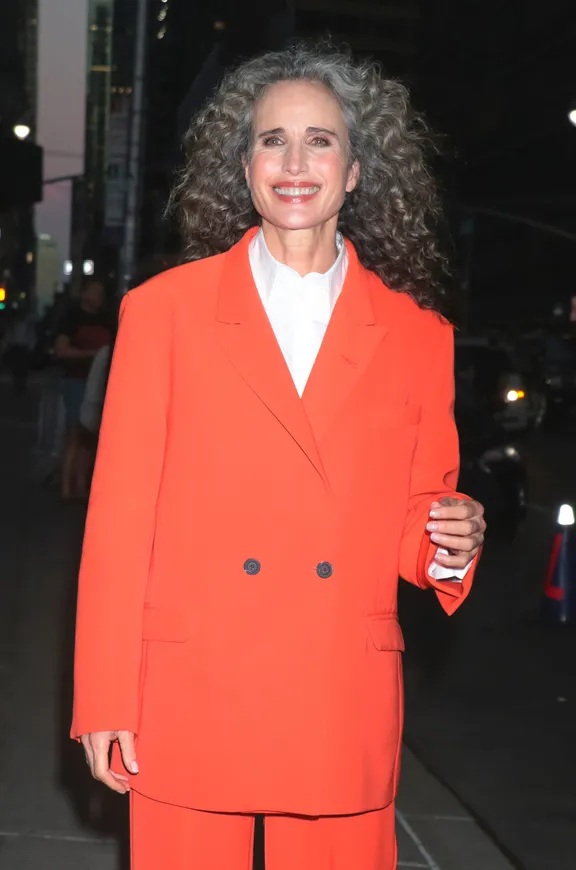 Fortunately, she realized she didn’t have to please anyone but herself once she ventured out into the world. She delighted in getting older and having new hair. She had no intention of hiding her age from anyone.

MacDowell has a granddaughter.

MacDowell discussed additional factors that encouraged her to maintain her natural hair color. She said she loved the confidence after noticing other regular women on Instagram making the change.

MacDowell recently revealed that her son and his wife are expecting a child. 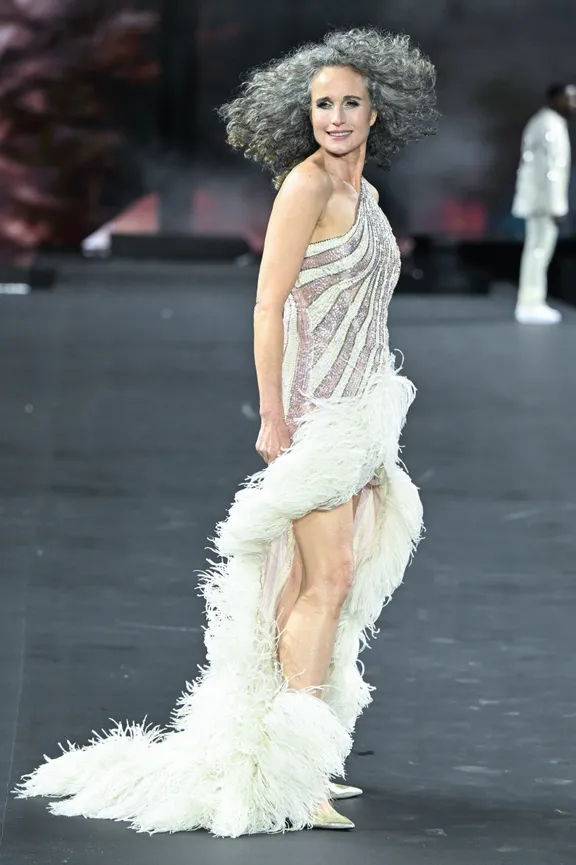 She also stated that her hair and face no longer seemed to match. The wrinkles on her face were visible. When she colored her hair, the youthfulness contrasted with the lines on her face, and she added:

“And in many ways, I think it’s more striking on my face.” “I just feel like it suits me.” 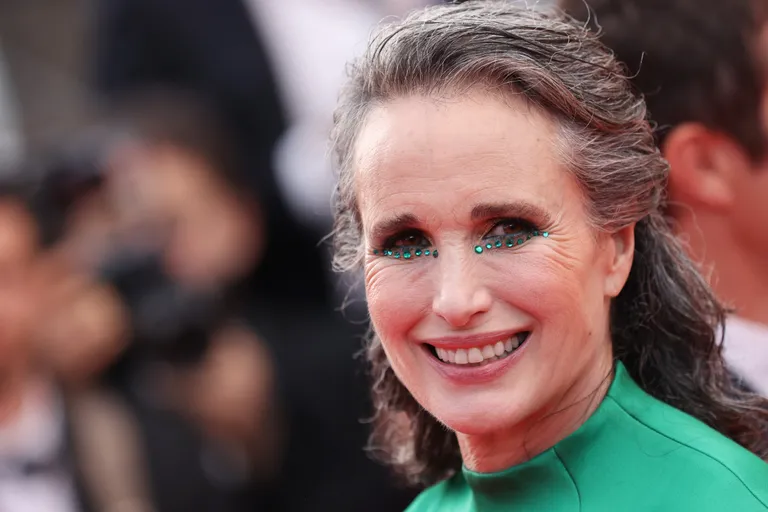 MacDowell felt great after deciding to keep her natural hair color. She felt free to be herself. She thought she was lovely just for being herself.

Stepping out into the world with her natural hair, she knew she could be an advocate for other women who feel they need to hide who they are. She began to use her platform to encourage others, much like the other strong women who had inspired her. 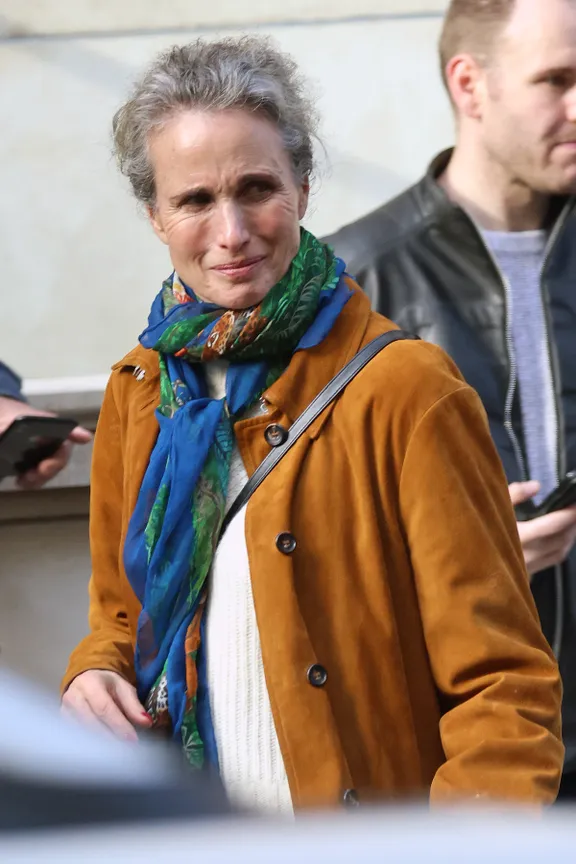 In an industry where aging can mean the end of your career, especially for women, MacDowell has always been open about her age. Despite the danger, she knew she didn’t want to hide her identity.

Although MacDowell’s fans were supportive, not everyone thought her natural hair color was a good idea. Some fans suggested that the actress color her hair. One Facebook user commented: 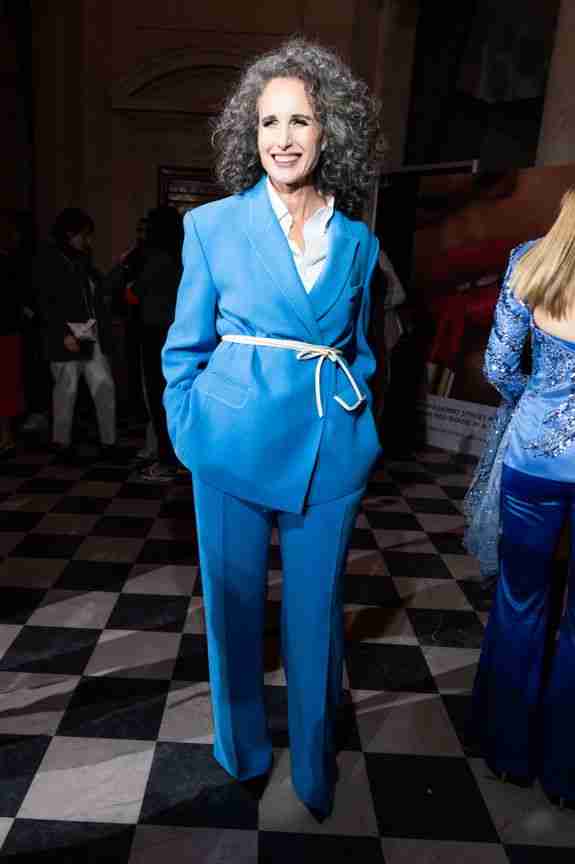 MacDowell recently announced that her son and his wife are expecting a child. The actress has three children and is expecting her first grandchild. She announced her pregnancy in a blog post and expressed her excitement about becoming a grandmother:

Despite pursuing a successful acting career, MacDowell has always prioritized her family. She enjoyed spending time with her three children and expressed her love for them in an Instagram post. 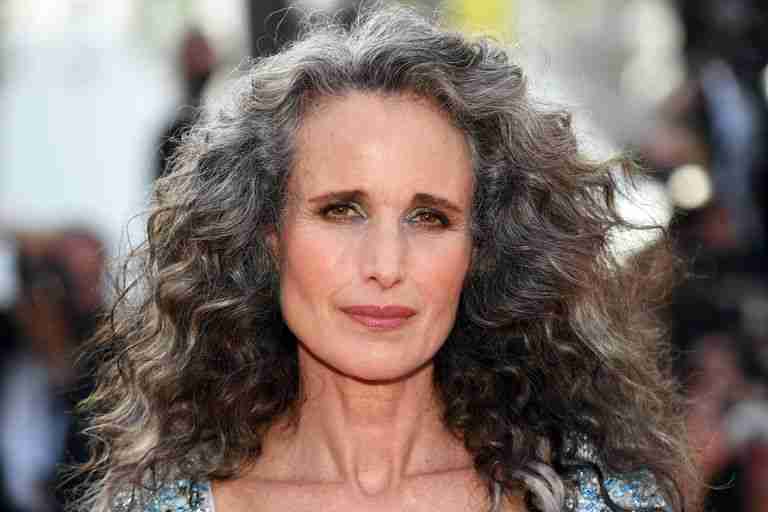 She captioned the photo, saying she adores her children and how much they have taught her. She continued by saying she couldn’t wait to see what her granddaughter had in store for her.

The post featured two photos of MacDowell’s son and wife, who appeared to be overjoyed about the impending birth. The new mother wore two dresses to show off her baby bump, and the couple could be seen smiling and embracing each other.

A Firefighter Has a Face Transplant After Third-Degree Burns & Survives Against All Odds – See Him Now, 7 Years Later