In this hard time, Bruce Willis’ family is by his side as he fights his disease. And even though he and his ex-wife, Demi Moore, got divorced 22 years ago, she and all of his daughters are joining him in hoping for a holiday miracle.


Bruce Willis, who starred in “Moonlighting,” suffered an aphasia diagnosis in March 2022. Since then, he has gathered support from his blended family, including his ex-wife Demi Moore, to help him through this trying period.

The retired actor has five daughters and two marriages. His first marriage was to Moore, which took place in November 1987 and was spontaneous. 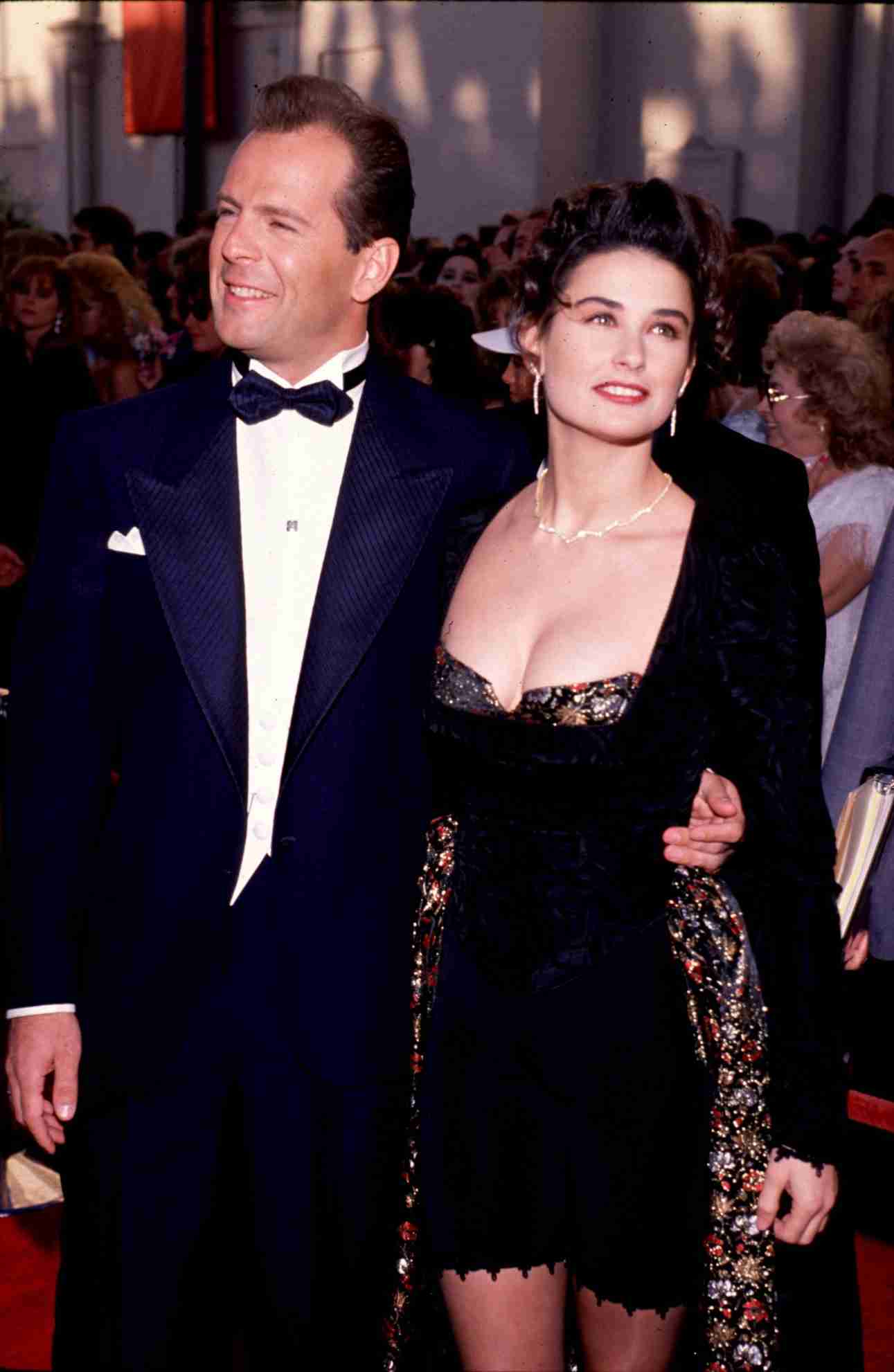 It was the actress’s second marriage, even though it was his first union. Before meeting the “Die Hard” actor, Moore was previously married to singer Freddy Moore from 1980 to 1985.

After less than a year of dating, Moore and Willis got married. Moore claimed that they were not in a rush to say their vows, though: 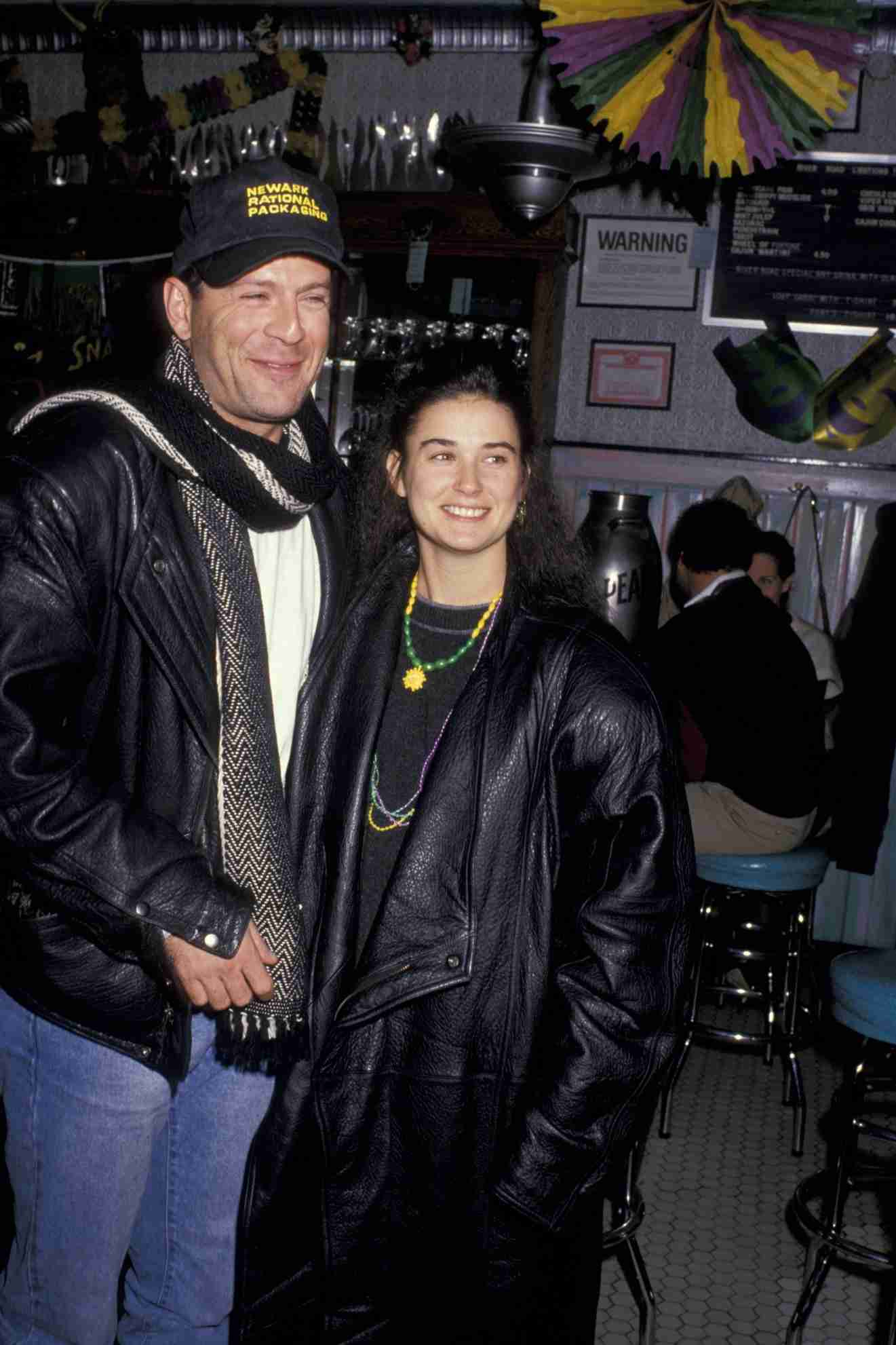 “There was no rush.” We got married in Las Vegas, but we went there to see a boxing match. We had sort of talked about [getting married] laughingly, and it just seemed OK. It seemed like [waiting] didn’t matter, that we loved each other so much.”

The Hollywood couple’s marriage experienced difficulties when they had three children, which resulted in the filing for a divorce. In a December 2000 interview with Rolling Stone, Willis was open about the breakup. 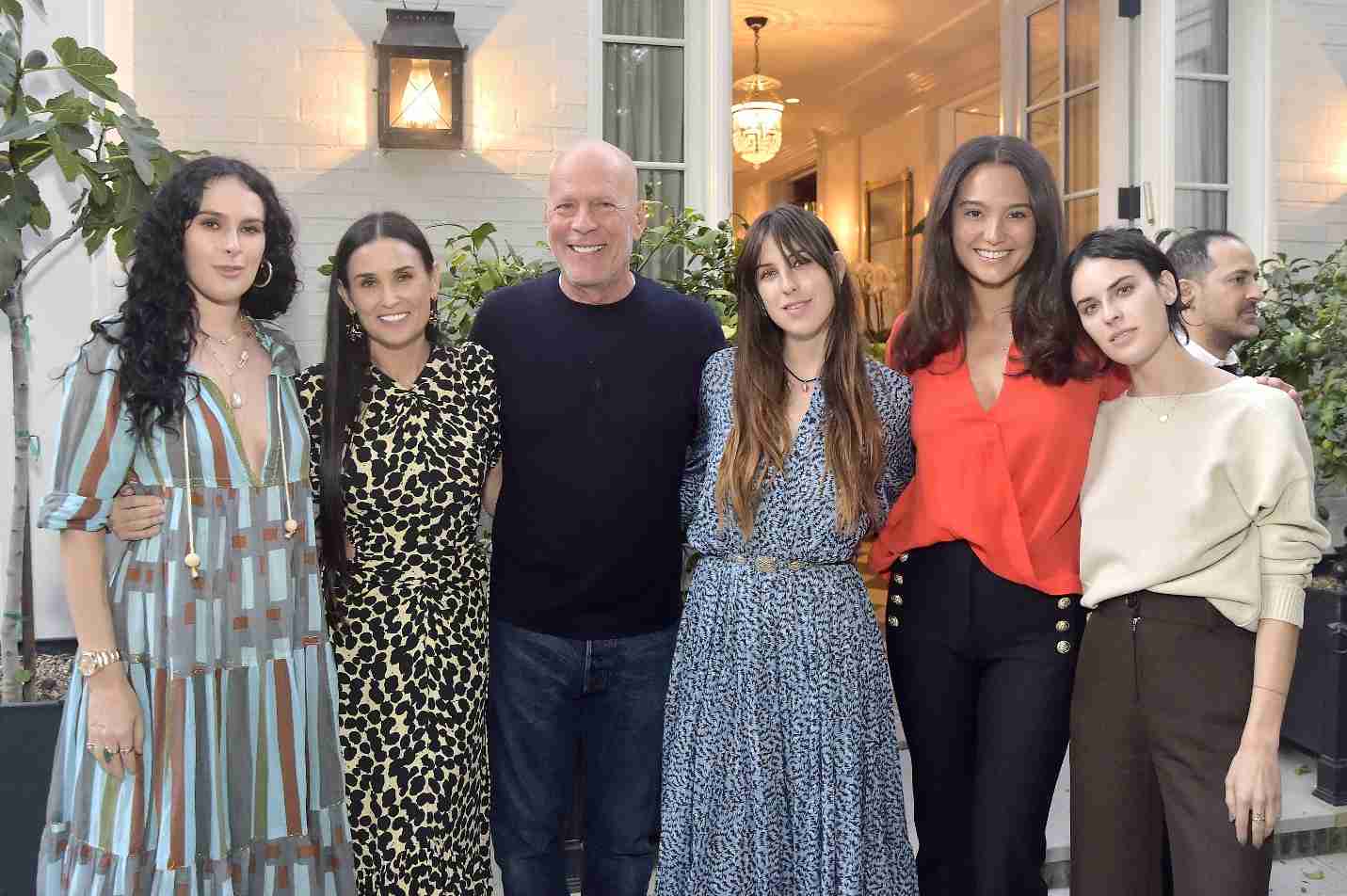 The German native said he was still trying to understand what had broken his marriage to Moore when questioned. He also expressed his love for his children’s mother at the same time.

“I haven’t figured it out yet.” I still love Demi. We’re very close. […] We realize we have a lifelong commitment to our kids. Our friendship continues. “The institution has been set aside.”

Willis and Moore divorced in 2000 after splitting in June 1998. Despite divorcing, they co-parented their children peacefully and earned the reputation of being Hollywood’s friendliest ex-couples. Moore and the children even went to the “Bandits” premiere with the family patriarch in 2001 to show their support. 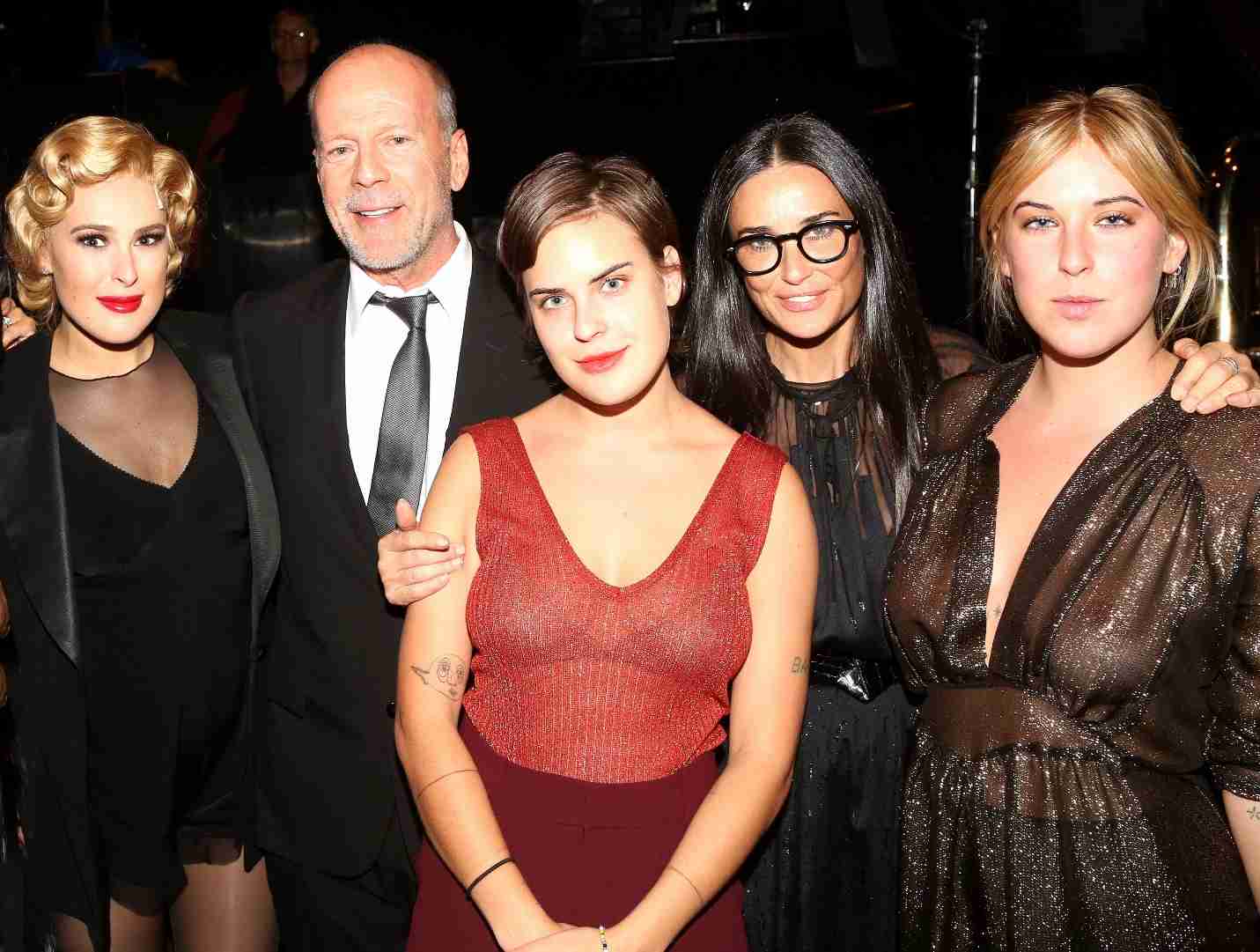 When questioned about her friendship with Willis, Moore stated that she and her brother would frequently be caught in the thick of it all since she was a “product of divorced parents,” and she did not want her girls to grow up in the same volatile situation she did. She clarified:


“At the time, I could not have seen what a gift that situation was, but without that experience, I would have not known there was a different choice to make in my divorce.”

Moore made it clear that she did not get married, have children, and then get remarried and make friends with her ex-husband. “But since that is what happened, I am grateful it turned out this way,” she expressed. 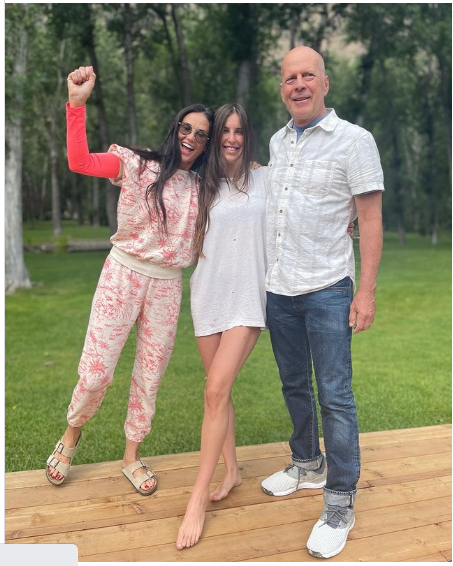 After their divorce, Moore wed actor Ashton Kutcher in 2005, but her bond with Willis lasted even then. She clarified that it was because of their shared children that she was able to make her friendship with him work. She continued:

“One of the most healing things for Bruce was seeing me meet someone who has brought me so much happiness.” And I so much want the same for him.”

She and Willis stayed close even after Moore and Kutcher were divorced in 2015. She claimed that since their kids did not “have to choose,” it was a win-win situation for them all.

Willis got remarried and had more children.

In the meantime, Willis married model Emma Heming in 2009. Mabel and Evelyn, the couple’s two daughters, were born together. 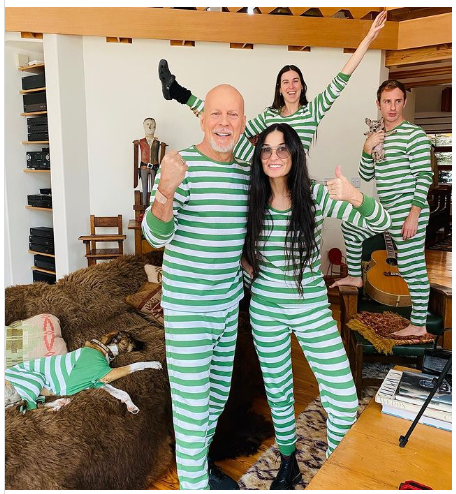 The father of five and Moore was cooped up in the same house with their kids in April 2020 during the COVID-19 pandemic lockdown. The family photo was shared on social media by the couple and their youngest daughter, Tallulah, together with her boyfriend and their pet dog.

Moore and Willis were pictured wearing identical green-striped pajamas. On the post, their child disclosed that they had all been quarantined for 27 days in the same home. Heming, Willis’ present spouse, gave her approval and wrote, “Not many can pull that color off!”Looking good, squad.”

In March 2019, Heming and the father of her children renewed their vows to celebrate their tenth wedding anniversary. The mother of two explained that the couple opted to celebrate for their small children and that it was wonderful to do it in their company.

The British-American revealed that having their daughters serve as flower girls were “important” to her and Willis to give their daughters a sense of inclusion in the celebration. She continued by saying that celebrating their time spent with their father for ten years was a sentimental milestone. 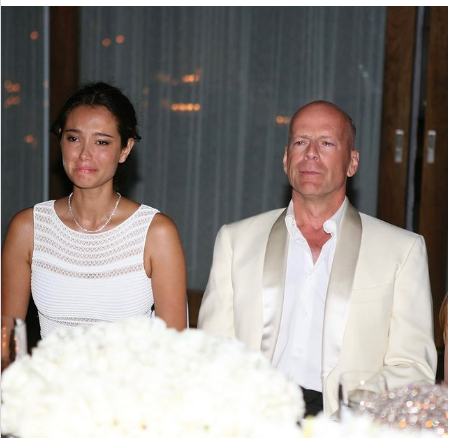 Due to the connection between Willis’ little daughters and his older ones, his blended family gathered to celebrate. Heming claimed that once Evelyn and Mabel see their elder half-sisters, Rumer, Scout, and Tallulah, she and her husband become nearly nonexistent:

“The older ones, they’re awesome, and they love being around their young sisters.” “The young ones just adore them.”

Heming was pleased that Moore was present for the vow renewal and shared that the “General Hospital” alum had warmly “welcomed me into her family as I welcomed her into ours.” 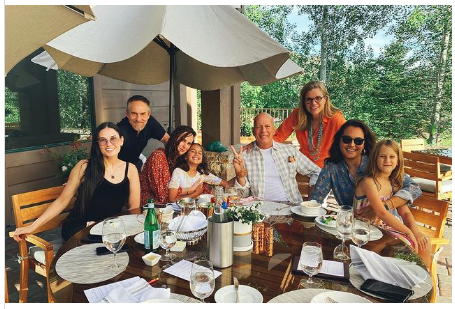 Heming stated her deep “respect” for Moore and her appreciation for how she and Willis prioritized their children to make sure they had a smooth transition following their divorce. The “Perfume” actress claimed that as a result of the event, she “learned and grew.”

Despite this, she underlined how important it was for Moore to be there at their ceremony, as she was at their first wedding, adding:

“I loved having her there again.”I wouldn’t do it without her.” 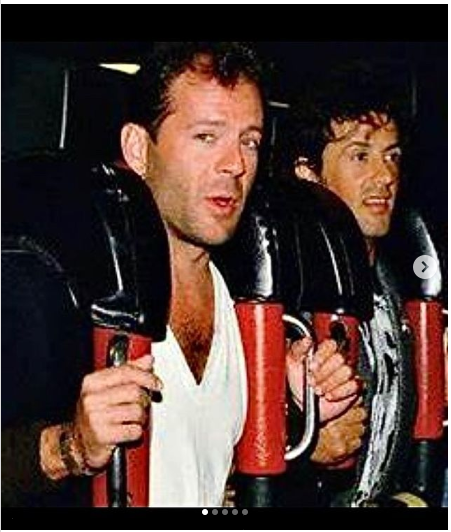 Willis Has an Aphasia Diagnosis and Is “Incommunicado”

Even though Willis seems to have created a close-knit blended family, they have been extremely unlucky to learn that he has been diagnosed with aphasia. In November 2022, Sylvester Stallone, a close friend of Willis, gave an update on the actor’s deteriorating health.

“Bruce is going through some difficult times. So he’s been sort of incommunicado. That kills me. “It’s so sad.”

In March 2022, after learning of Willis’ diagnosis, the “Rocky” actor posted a sincere message on Instagram, wishing his co-star well. Along with an old photo of the two, Stallone added that he prayed for the actor and his loved ones.

The “RED” actor’s family, which also includes Moore, Rumer, Scout, and Tallulah, said in a joint statement that he will be giving up acting due to his health. They promised to support him “as a strong family unit.” 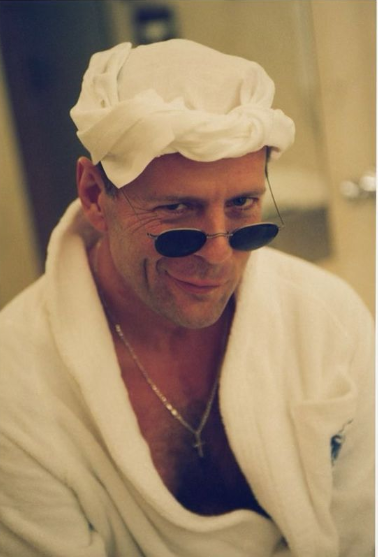 Many celebs left comments on the family’s Instagram pictures, including Jamie Lee Curtis, who said, “Grace and guts! Love you all.” In a letter, Rita Wilson expressed her shock at the tragic news and thanked the family for informing everyone. She said, “Keeping you all in our prayers.”

Matthew Perry shared his sorrow at the news on Twitter and added that Willis is “still the coolest man” he has ever met. He promised to keep praying for him for a time.

Tallulah posted a cute photo of her and her dad dressed in festive jumpers and plaid shirts. She posed while cuddling up to Pilaf, her mother’s pet dog, and giving her an embrace. Willis was captured in the image smiling and lovingly greeting the puppy.

The children, Willis and Heming, were all in a festive mood. Pictures of Willis’ wife and the kids putting up their Christmas tree at home were uploaded to social media. Evelyn and Mabel may be seen alternately putting ornaments on the tree in one of the pictures.