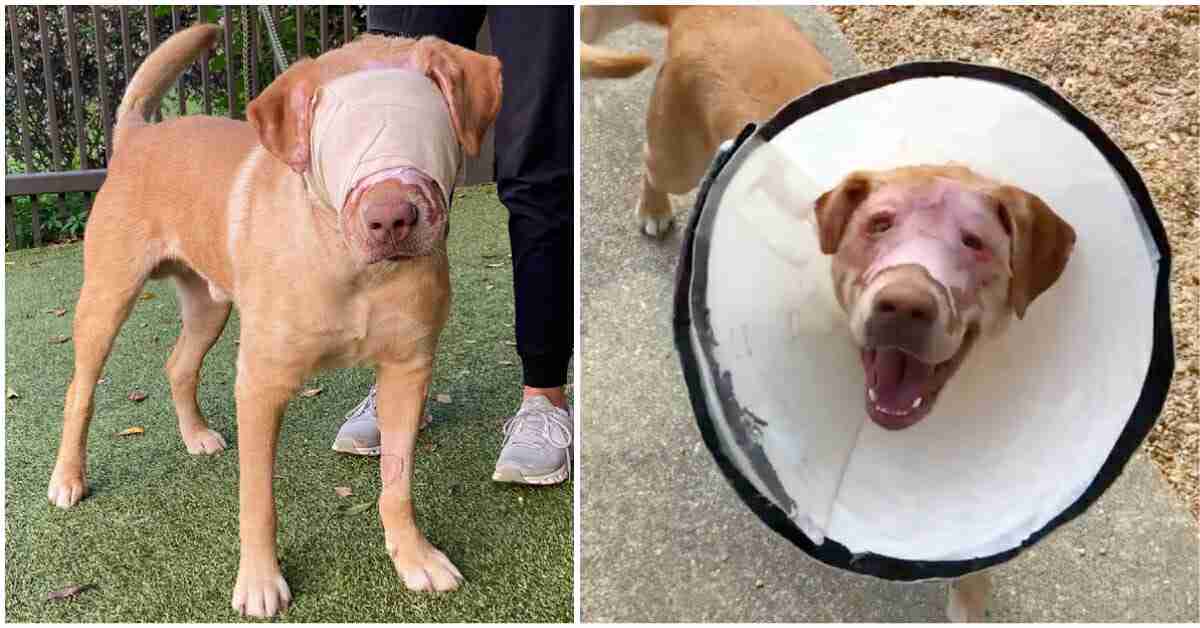 How vicious some humans can be to dogs is quite disturbing. These helpless animals frequently experience unnecessary misery and pain.

That applied to one dog who had suffered a terrible attack that left his face scorched.

Fortunately, he has since been making a miraculous recovery with the help of several sympathetic vets. A dog named Buddy, characterized as “happy and carefree” and who “never posed a threat to anyone,” was set on fire in April, according to the Tunica Humane Society.

He was discovered with an extension cable wrapped around his neck, his face entirely burned and roasted black. 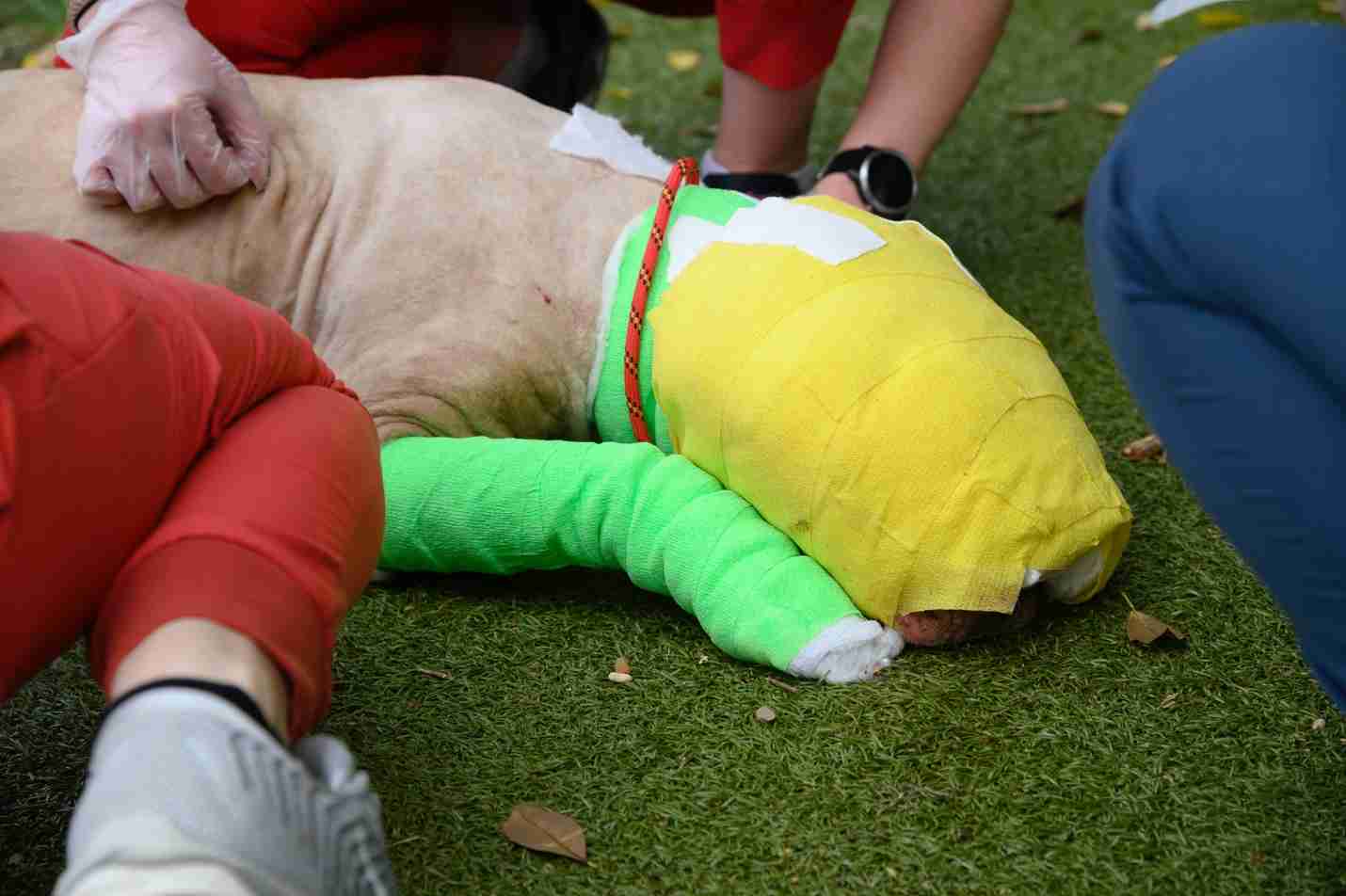 A child eventually admitted to setting Buddy on fire, but he cannot be charged because he is under 12.

Buddy was placed in the care of the Tunica Humane Society in Mississippi, and the College of Veterinary Medicine at Mississippi State University provided his medical care.

Buddy started his long but hopeful journey to recovery while under their care. 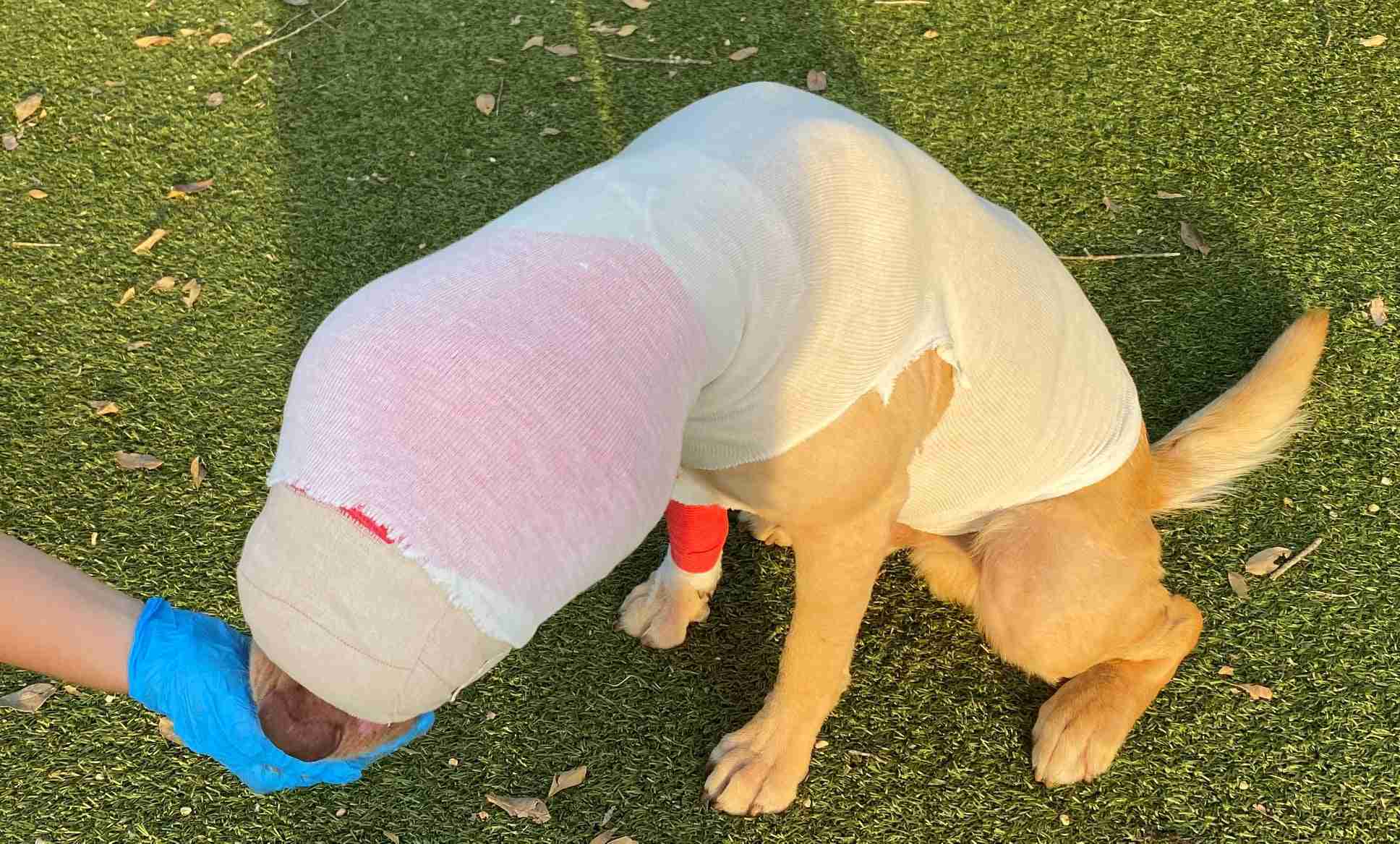 As with any burn patient, Buddy’s vital signs are good, but as associate professor of veterinary surgeon Dr. Elizabeth Swanson told WTVA, “this is very much the base of a steep mountain to be climbed.” “We’re making sure he’s comfortable, changing his bandages, and taking care of any issues as they come up.”

Thankfully, Buddy doesn’t seem to have lost his vision despite the severe incident. According to the Tunica Humane Society, the doctor said his eyes were still in good shape. 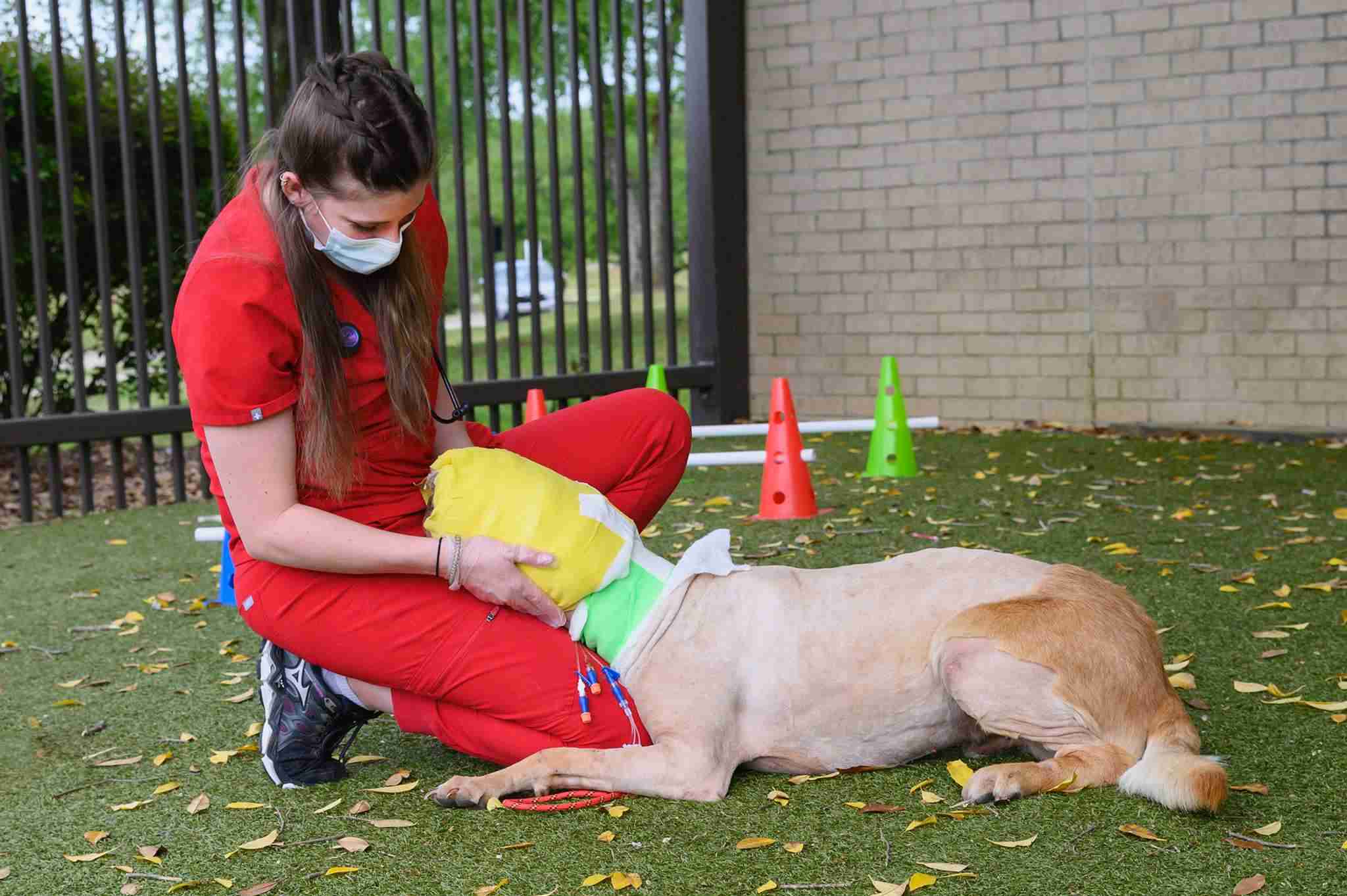 Surgery will be performed to repair the damage to his eyelids, and once he recovers, he should be able to see somewhat. Buddy still has bandages covering every inch of his upper torso. But despite everything, he remains cheerful.

The Humane Society posted on Facebook that “he progresses daily.” Never once let his physicians down. 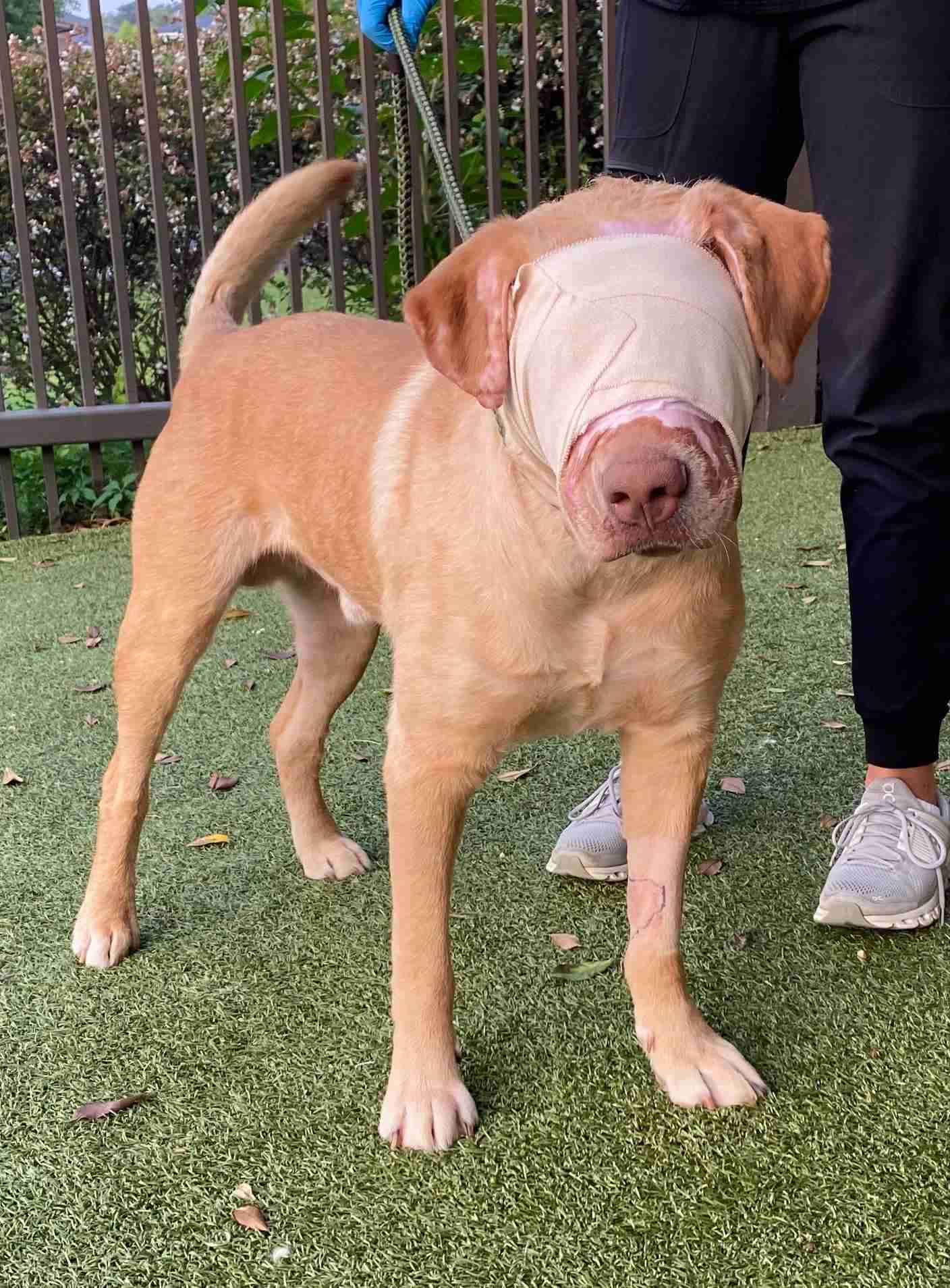 Everyone involved has been quite happy with how his skin grafts have turned out. Although the recovery from burn injuries is very slow, Buddy is doing exceptionally well.

He displayed a notable improvement in the appearance of his face after today’s bandage change. While recovering, Buddy is picking up some fundamental commands.

They posted on Facebook, “This nice, gentle dog didn’t deserve what happened to him.”

He posed no danger to anyone. It was incredibly cold-blooded and planned. “I hope Buddy’s terrible wounds weren’t in vain. That this tragedy will, somehow, result in something positive, Justice will be done in situations like Buddy’s when that transformation occurs. 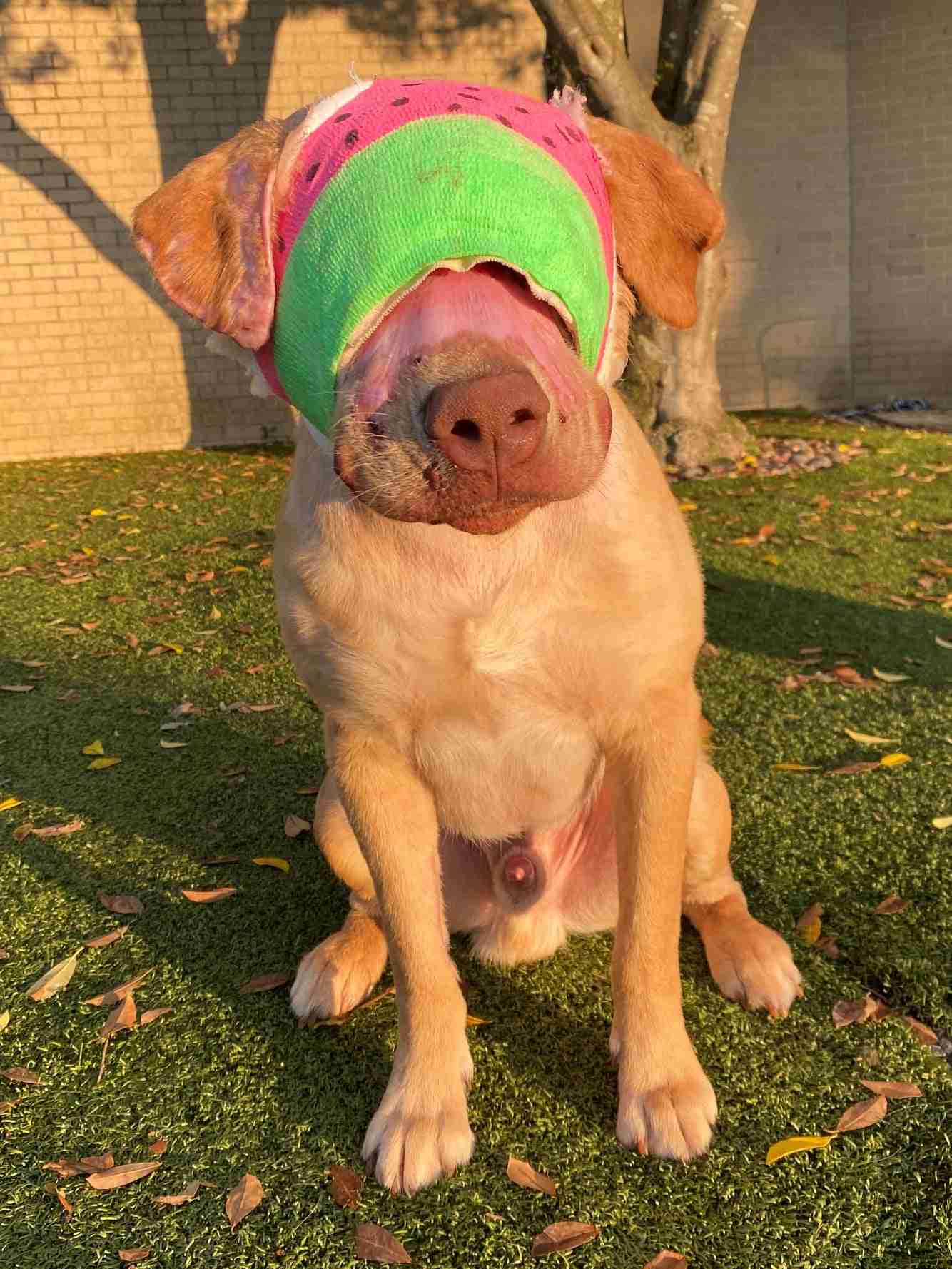 Buddy has improved and is receiving the best care possible from Mississippi State vets since his tale went viral a few months ago. His need for bandages has decreased due to the skin grafts he has had to repair his burns, and he is gradually becoming the man he once was.

“He is much happier and more lively now that bandages no longer bind his ears. He must be experiencing great joy as his life gradually returns to normal, the Tunica Humane Society said in a previous report. And on August 7, the rescue team declared that Buddy’s recovery had reached a “major turning point.”

For the first time in more than three months, Buddy was finally allowed to see when his bandages, which have fully covered his eyes since the attack, were removed without needing heavy sedation. 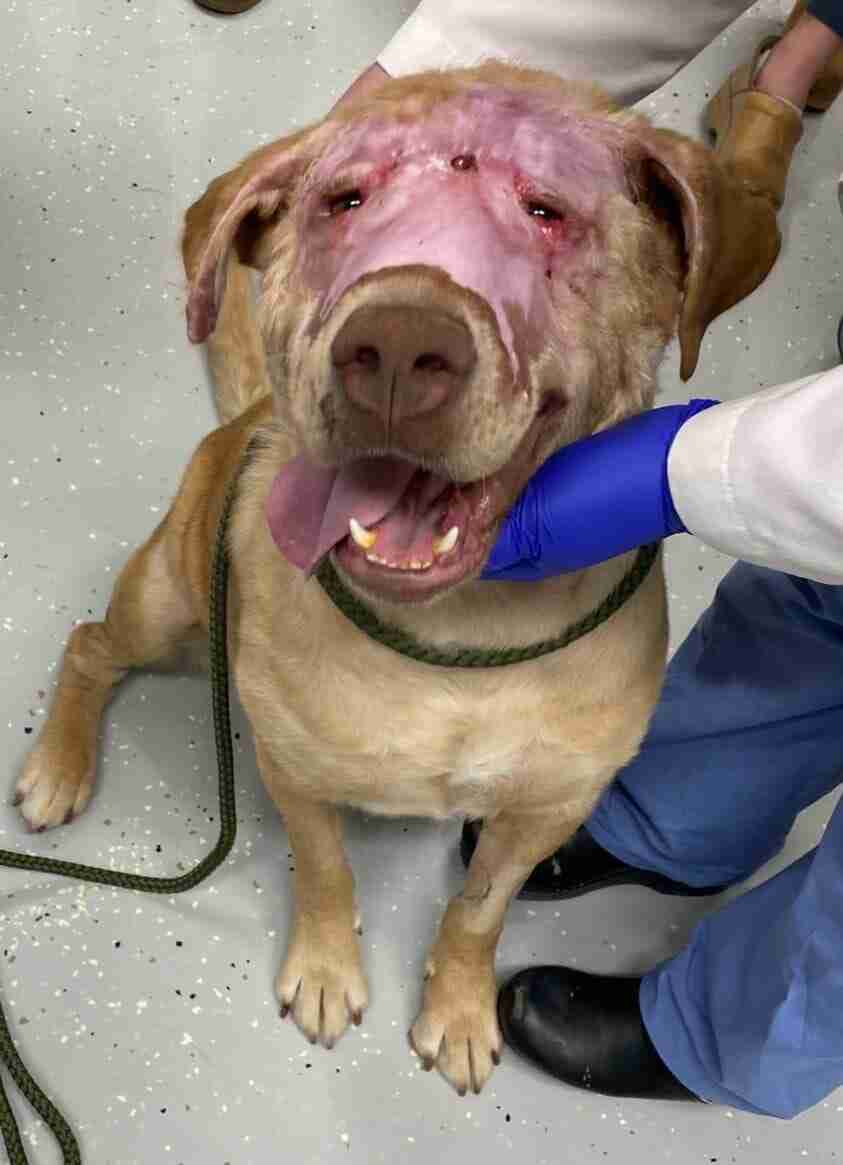 The Humane Society stated that “his eyes were open, and he was highly conscious.” In response to all of your countless prayers, Buddy is still able to see. “Buddy’s last vivid memory was of the terrifying seconds before a child set fire to his face.

This dog’s entire life was altered in a single instant. For this sick pup, being able to see was a significant step toward getting back to normal, and his caregivers believe his personality has started to emerge again.

Director of the Tunica Humane Society Sandy Williams told WREG that since Buddy was exposed to the outside world, “his entire personality has changed.” He is joyful and energetic and is seen roaming the hospital’s hallways while carrying a huge ball. He enjoys balls. He moves around with them so that everyone can see.

Although it’s a significant development, Buddy isn’t entirely out of the woods. His eyelids will need some treatment to protect his eyes because he hasn’t recovered, the Humane Society posted on Facebook.

Additionally, he will require some particular care for the remainder of his life due to the severity of his wounds. Williams told WREG that the man’s “skin is going to be sensitive, his eyes will need eye drops, and he’ll have to wear sunscreen when he’s outside.” The owner says he won’t be a dog that can spend hours in the sun outside.

However, Buddy’s future still appears promising: the Humane Society reports that he will soon be discharged from the hospital, and they will locate a foster home while he receives further treatment.

And eventually, they want to find Buddy and his pal Snoop a permanent home. We’re so happy that Buddy can see once more and is beginning to resemble his former self! Thanks to everyone helping him, he has been recovering most miraculously.