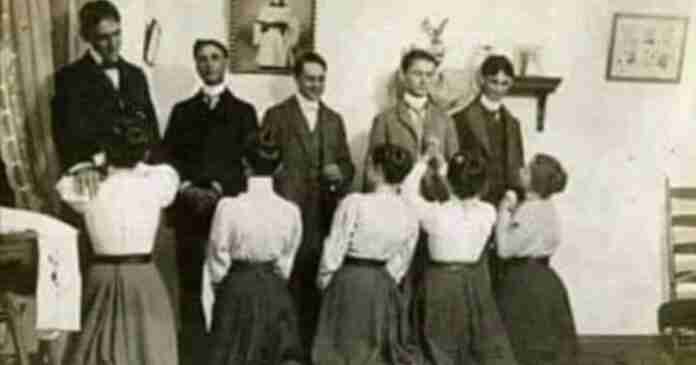 Ted Hurdis sent me this image of a cute little tradition that was once followed at the turn of the last century – yes, from the 1800s to the 1900s – in which women would customarily get down on their knees at Christmas and ask their husbands for forgiveness for all the mistakes they had made during the previous year.

How beautiful. I’m glad everyone recognized that women were the only ones who made mistakes and needed to apologize at the turn of the century when they were still rational.

What has become of this custom? One can only imagine how men in the 1800s and 1900s would be clinging on by their fingernails during this season, knowing that there were still roughly 1,000,000 seconds until their wives begged for forgiveness and everything would be right again—while they were out gambling, sniffing coke, and shagging hookers.

The law allowed a husband to confine his wife. If he hit her, she wouldn’t have much legal recourse. In most cases, the law stays out of marital disputes.

Married women were categorized as lunatics, idiots, outlaws, and kids.


Even her children were not hers following the law. And without a court order, a male might lock a woman out of the house if she left to find safety elsewhere, as Caroline did twice.

150 years ago, there were only three ways to get a divorce. All of them were ruled by the Church of England, which thought they were against God’s will and punished them harshly. 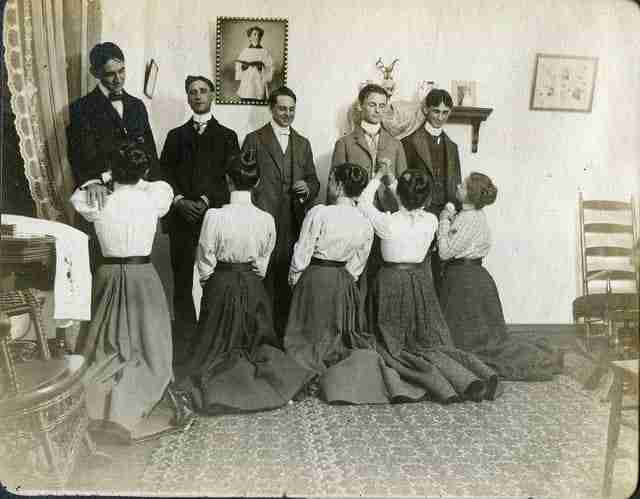 Whether the marriage was void because of insanity, impotence, or incest.

The Church permitted divorcees to remarry in these situations but declared the children of their second marriages to be illegitimate.

In cases of adultery, sodomy, or physical violence, a second option kept the petitioners from getting married again but let them live apart.

A third choice was to get a divorce and then sue your partner for adultery. If they were successful, Parliament would at long last grant the couple a legal divorce that would not invalidate the legitimacy of their children.

However, as the Church had intended, almost nobody could afford to go through with such a drawn-out and expensive process.

The new Act transferred jurisdiction from church courts to a new civil court; this principle gave rise to today’s divorce courts and sparked the social upheaval that led to the current divorce rate of 40%.

It was the first breach in the barrier preventing women from obtaining sexual and financial equality, and it also gave women authority over money through bequests and investments. Conservatives reacted with horror.


There was still a great deal to do. The Infant Custody Acts of 1873 and 1886 improved on Caroline Norton’s proposal. Married women were given the same property rights as unmarried women in the Married Women’s Property Acts of 1870 and 1882, enabling them to keep their money, possessions, and salaries.

Other causes of divorce, however, were not recognized; women continued to be treated as second-class citizens. Long into the 20th century, women had no legal options for dealing with abusive husbands.


“In Blackburn and Wigan, it is usual for the husband to kick and abuse his wife when he returns home at night,” a lawyer defending a spouse against a divorce petition may claim.

In the event of a divorce, the husband would have priority over the wife for custody of the children as long as he had not been found guilty of assault.

In the 1900s, one-third of peerage marriages ended in divorce, showing that divorce was still something only the wealthy could do.

During the Edwardian era, just one politician carried the torch for changing divorce laws.

In the House of Lords in 1902, Earl Russell spoke up in favor of trial separations, gender equality in the law, and giving poor people an equal right to divorce.

He claimed that the law was unreasonable and unfair and that it encouraged immorality by giving relief to those who were unhappy in their marriages.

The Lords rejected Russell’s bill in horror because they believed Russell “had formed.”

The Earl, Bertrand Russell’s older brother, was a well-known lawyer who had served time in prison after being convicted of bigamy.

According to the Lord Chancellor, the harridan he had married “had poisoned the entire atmosphere in which he lived.”

When Russell believed he had legally separated from his wife and gotten a divorce decree, he flew to Nevada to wed American divorcee Mollie Cooke.

Even if it meant spending a weekend at a hotel with a “lady unknown” to get the necessary proof from a chambermaid, divorce was still frowned upon in stuffy circles, and accepting responsibility in an adultery lawsuit was still a matter of honor for the guy.

But it wasn’t until 1923’s Matrimonial Causes Act, which enacted gender equality in divorce proceedings and made divorce more affordable for the poor, that divorces started to become more common.

The most telling bad thing about divorce was the attention it got from the media, which also made the number of divorces go up.

The judgment in the 1921 case of Peterborough’s Bull Hotel’s adultery accusation against Archdeacon Wakeford received much media attention.

Russell had broken the law, which was found out when he returned to England and his British wife’s appeal was successful.

His divorce was finalized, and his marriage to his second wife was recognized as legal after he served his three-month prison sentence.

No matter what, the divorce issue persisted.

A Royal Commission was established to look into changing divorce laws as Russell resumed his fight with the Lords.

The atmosphere was changing. With Edward VII taking the throne in place of the traditional Queen Victoria, public life became more playful thanks to his string of mistresses. The Church, however, remained opposed.


The Archbishop of Canterbury referred to divorce as being against Christian principles and raised worry about “expanding those services to classes other than those who use them presently.”

Concerns that women and the lower classes were becoming out of control increased due to the suffragette movement and the rise in contraceptive use.


After three years of hearings, the Royal Commission issued its report. The majority of experts in the social, medical, and legal disciplines were in favor of the change.

A handful of radical church members opposed Herbert Asquith, the prime minister, postponed discussion of the matter, and it wasn’t brought up again until after World War I.


In another universe, it turned up again. People have learned from the conflict that life is meant to be lived.

Misbehavior had dropped to the level of a tennis club and was no longer associated with the upper classes.

A kiss no longer symbolized an engagement. Young people smoked, drank, and wore lipstick in public.

They discussed “companionate marriage,” which was equivalent to being committed to one person while engaging in immorality.

One in ten Los Angeles and New York girls reportedly carried a contraceptive. At least among the young and bright, there has been progressed.

The American understanding of marriage was that it was a social custom rather than a sacrament.

It was still a matter of honor for the male to take the fall in an adultery lawsuit, even if it meant spending the weekend in a hotel with a “lady unknown” to get the necessary proof from a chambermaid. Divorce was still frowned upon in stuffy circles.
Find More Articles 👇 👇 👇