Children suffered the most when a mother battled her addictions; the children endured trauma and pain for years. But when they met their mom’s boyfriend, everything was different.

Parents have a vital role in raising their children, but many struggle to keep a secure and safe home.

Two siblings hoped that by the time their mother overcame her challenges, their lives would get better. Sadly, their dreams never came true. Discover the surprising hero in their quest by reading their story.

A childhood marked by pain

Jordan Benewiat always connected the memories of her childhood birthday celebrations with sadness. Their family home lacked love and joy, and her mother frequently drank.

She recalls wondering if she would make it to school and where their next meal would come from. She shared her brother’s constant feelings of fear and anxiety.

The siblings hoped their mother would change for many years, but they were always let down until Steven Benewiat, their mother’s boyfriend, knocked on their door. 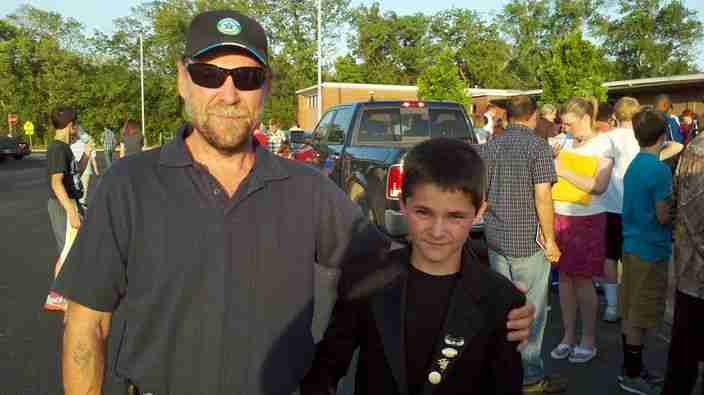 Their Mom’s Friend saved the Day

Steven saw his girlfriend acting anxiously and understood he had to act to relieve her suffering. He reported the event to the police, who then took the unwanted kids into foster care.

Steven made a big decision when his heart ached for the children. Despite having no family ties to the Benewiat siblings, he decided to fight for them.

He cried for them.

Because the state was unable to find a family willing to adopt both children, despite Steven’s desire to do so, he was given emergency care.

Jordan recalled the initial instance of Steven crying. He believed the children were being taken away at the time. She revealed:

“I had no idea why he was crying in the courtroom, but I burst into tears when he explained it.” He hugged me until we had to leave. Luckily by divine intervention, he was given emergency foster rights.”

Three years later, the adoption was finalized, and Jordan and Jarred’s lives improved. Steven was always ready for them and never let them down.

He is their hero.

Jordan has developed into a happy, healthy adult because of Steven’s support and love. Despite having a difficult upbringing, she let the past go and moved on.

Jordan still considers Steven one of the most significant things in her life, and she calls him her hero. She remarked:

“I remember every feeling I felt for the seven years we didn’t know him. If it weren’t for him, I’d probably have over 18 years of that pain. He’s one of the few people on this planet who has yet to let me down.”

The daughter had a message for people.

Jordan spoke with people using social media. She was tired of hearing lines like “Never lose faith” and wanted friends, relatives, and strangers to understand why she had lost hope.

Jordan and her brother had a bright future ahead of them because Steven was always there. He was a loyal person, and that was a huge difference. But their mother’s decisions still had an impact on their lives.

The darkest part of her childhood

Jordan and Jarred learned to let go of the hope that their mother would be able to overcome her addiction, even though many others pushed them to do so. The daughter also said it was “hardest” to let go of her mother.

But it was necessary for their recovery and peace. Jordan stated

“She is the shrine of all my failed attempts to have a mom.” “She was a wonderful human, full of all the colors in the rainbow and sunsets, but she was also the darkest part of my childhood.”

Jordan urged people to think hard before advising people from broken homes. She explained that neither she nor her brother wanted to give up on their mother, but hope wasn’t working.

Jordan believes that stating, “Letting go must have taken every ounce of courage, and I’m sorry you had to fight that fight,” is preferable to asking family members to remain believing and waiting for their loved ones to overcome difficulties.

Letting go of their mother was for the best.

Every child’s relationship with their parents is unique. It was best for Jordan and her brother to distance themselves from their mother.

Others, on the other hand, may find that believing their mother or father will recover is a type of healing in and of itself. What are your thoughts about Jordan’s points of view?

Nicole Kidman Continues To Attend Church And Place Her Faith in God, Even Though Her Friends Make Fun of Her For It

Blake Shelton Plows Field, Gwen Stefani Cooks for Whole Family — They Take Care of Each Other at Their Cozy Farm