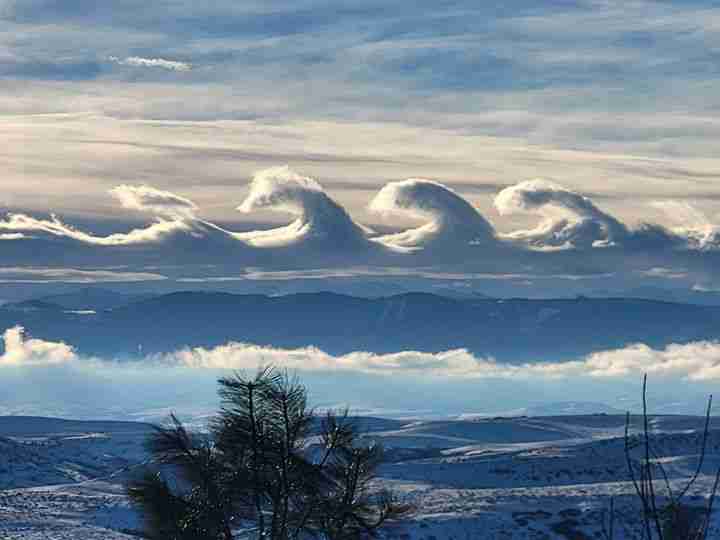 Amazing pictures of an unusual cloud formation drifting over the horizon like ocean waves were captured by a skywatcher.

According to Rachel Gordon, who lives in the US state of Wyoming, she snapped the pictures from her parents’ back door. She later shared them on Wyoming via The Lens Facebook page, where they quickly gained popularity.

On Tuesday, the Sheridan, Wyoming, the community was able to observe the Kelvin-Helmholtz instability event over the Big Horn Mountains.

The Kelvin-Helmholtz instability happens when two non-miscible surfaces are “moving” on top of one another at different speeds. It happens in the case of clouds when a quicker airflow passes over the rising air beneath. The natural formation bears the names of the scientists Hermann von Helmholtz and Lord Kelvin.

These clouds, sometimes known as fluctus clouds, are thought to have inspired Van Gogh’s painting Starry Night, among other works.

According to Matt Taylor of BBC Weather, one of the things that makes Kelvin-Helmholtz clouds so beautiful is that they demonstrate the mobility of the environment.

How the atmosphere moves and reacts to its surroundings, much like ocean waves do. In essence, the air is ascending and toppling over.

The surf was high on Tuesday afternoon along the Bighorn Mountains’ crest. I mean, sky surfing. Amazing examples of enormous cloud waves curved and smashing over the icy terrain were visible from Sheridan, Wyoming.

The Kelvin-Helmholtz instability, which results from variations in air density in nearby sky layers, created wave clouds. For these clouds to trace their wave-like structure, moisture and powerful winds are necessary. The Bighorn Mountains extend into the High Plains and are located in northern Wyoming and southern Montana.

Despite being spectacular, they are separate from the Rockies to their west. Rachel Gordon uploaded the pictures to the Facebook group Wyoming via the Lens.

Other photographers also uploaded pictures of the clouds to the group, showing various angles of them.

In the group, Gordon posted, “I think everyone should see this amazing phenomenon. Strong winds in the atmosphere and rising channels of instability off the ground are characteristics of situations where Kelvin-Helmholtz wave clouds arise. The powerful winds above force the instability channel over as it rises, churning up eddies.

In this instance, it appears likely that the orographic lift caused by the Bighorn Mountains assisted in forcing the air to climb.

It’s possible that certain instability areas emerged due to the sun’s heating of the earth and as it rose into the much colder air above. The wave train on Tuesday night was large enough for weather satellites in orbit to see it!

Other fluids on earth and in space, besides the atmosphere, also exhibit Kelvin-Helmholtz instability. These wave clouds in the atmosphere are ubiquitous, especially close to mountain tops; however, they usually only last a short while.

Pure cases are uncommon. The Wyoming performance on Tuesday was outstanding in both scope and organization. It reminds me of another mountain Kelvin-Helmholtz wave show in Breckenridge, Colorado, in 2015.